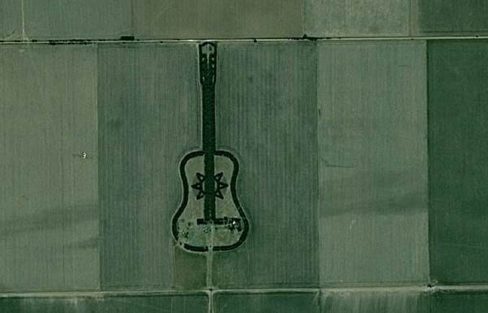 It’s little known about and rarely visited, but in the heart of Argentina’s Pampas is a guitar-shaped forest created from thousands of eucalyptus and cypress trees complete with a long neck, strings and the curve of the instrument’s body. It stretches for almost a mile and is easily spotted along the fertile farming land by passing planes and can be seen from Google’s satellite maps.

This isn’t a coincidence and the story behind it is rather touching. It was created by local farmer Pedro Martin Ureta and his children who planted the trees more than 4 decades ago to commemorate his beloved wife. During the ‘70s, the couple were taking a flight over the Pampa when his wife Graciela Yraizoz pointed to a piece of farmland that looked like a milking pail and suggested they create a better one, perhaps a guitar.

Unfortunately, in 1977, she sadly passed away at the age of 25 along with their fifth unborn child after suffering from a ruptured aneurysm. Several years later, Pedro decided to create the guitar as a way of honouring her life. Along with his 4 children, he set off to plant more than 7,000 trees, first starting with the guitar’s body, then moving in to plant a star-shaped hole and long rows of blue eucalyptus trees as the strings that run along its neck. Over the years, he’s worked tirelessly to cultivate the plants and it’s only recently that they have matured enough to finally see his lost wife’s dream become a reality.

Pedro has admitted that he’s only every seen photos of the site from above as a fear of flying has stopped him taking a flight over it.