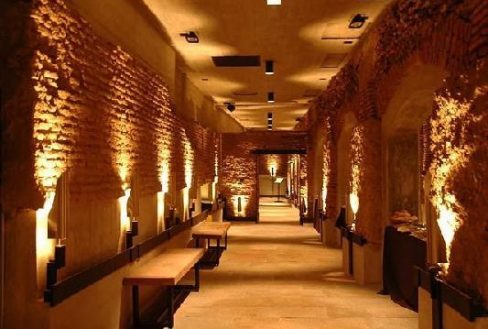 Planning a break in Argentina’s capital, Buenos Aires? You’ll find plenty of information about the city’s iconic landmarks but there’s very little on the El Zanjón de Granados museum.  A place with mysterious subterranean passageways. Over 30 years ago local resident Jorge Eckstein purchased a crumbling mansion in the historic San Telmo district. He planned to turn it into a glittering new restaurant but had no idea he was about to stumble on one of the city’s most mysterious archaeological sites. During the renovations, he noticed something strange about the foundations and one of the patio began to sink. As they dismantled the flooring, they discovered a portal leading to a subterranean labyrinth. Legends existed about underground tunnels below Buenos Aires, but they remained a myth. Archaeologists came to investigate, and the dig led to the discovery of more than 2 kilometres of vaulted brick passageways.

They concluded they were a drainage tunnel from the 18th century, or they were part of a much larger network created a century earlier by Jesuits. These priests whose unpopularity in the city led them to create escape routes out of the city. This is hard to prove as many of the tunnels disappeared during the construction boom in the second half of the 20th century. It took 17 years to excavate the site with more than 150 truckloads debris removed from the tunnels. During the dig, a hoard of artefacts appeared from around the world: historic coins, English china, old French tiles and several African pipes.

Today, the site is an underground museum and many of the items found are on display. You can wander below Buenos Aires’ street level to find a series of tunnels that led into courtyards and rooms including a slave cell. The fascinating museum tells the story of the history and its later discovery through a century of photos. The best way to experience the museum is on one of the daily 1-hour tours where guides take you on a journey though the passageways.

If you’re looking for something a little different that Buenos Aires’ more famous landmarks, El Zanjón de Granados provides a unique glimpse into the city’s extraordinary past..

Ready to start planning your adventure to Buenos Aires and Argentina? Get in touch with one of our South American experts on +44 (0) 207 1478 or email us here and we’ll help you create a bespoke one-off trip built around your tastes and budget.