Wildlife spotlight on the Andean condor

The mighty Andean condor is iconic in Latin America and tops most bird and wildlife lovers’ list of species to see. Here’s some interesting facts about these magnificent birds.

They are the largest flying bird in the world

Andean condors are the largest flying bird in the world with a wingspan of up to 10-feet. When they are fully mature, they can reach over a metre tall and weigh up to 15 kilos. With that size and weight, it’s not surprising that they need such large wings. That said, if they fly in ideal wind conditions, they can often reach more than 5,000 metres, circling on the morning thermals.

Unlike there Californian cousins, the Andean condors have bald heads which are surrounded by white feathers along the neckline. The males are almost always bigger than the females, which is unusual for this family of avifauna.

They don’t just live in the Andes

Despite the name, Andean condors don’t just live in the Andes Mountains. They are commonly spotting flying around the coastal regions of Latin America, as well as the deserts of Northern Chile and Argentina and along the edge of Peru. Sightings are rare in Colombia and Ecuador, but they have been known to fly over the Amazon occasionally.

They live almost as long as humans

Andean condors have a life expectancy of over 60 years in the wild. In captivity, this can increase to a staggering 75 years, almost the same as a human. One of the only birds in the world to live longer is the Californian Condor in North America. 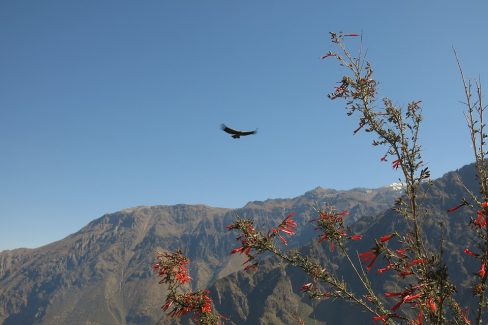 They don’t build nests for their eggs

Interestingly, unlike most birds which build a nest to protect their eggs, Andean condors lay on cliff ledges. Both parents are required to look after the egg during the incubation period to ensure it stays safe. They lay one egg every couple of years, and after hatching 2 months later, the chick stays with the parents for 1 year before flying the nest. It then takes over 5 years for them to reach maturity.

Though they may look graceful, the Andean condor is a scavenger and part of the new-world vulture family of birds. This means that most of their diet is made up of the leftovers of dead animals. They typically target large mammals in the mountains and fish along the coast, swooping in to pick at the carcasses.

They are classified as threatened

Sadly, the Andean condor is classified as threatened by the IUCN and could face extinction in the future. There are many reasons for the decline of these large birds, but like most threatened wildlife, human hunting and loss of habitat are the main culprits. Fortunately, there are efforts by zoos and conservation experts to ensure these amazing creatures are around for future generations.

If you’d like to see Andean condors in the wild, the best place is the enormous Colca Canyon in Peru. To start planning your tour, speak with one of our Latin American experts on +44 (0) 207 407 1478 or email us here.

RELATED: If you are a wildlife lover you shouldn’t miss out on these amazing experiences