Latin America isn’t short on street snacks. Like much of the world, some of the tastiest cuisine gets cooked on the fryers and planchas that line the streets on vendors’ carts. South America is not the cheapest continent, but plenty of cheap eats can be found if one knows what to look for.

Arguably the most iconic snack from Latin America. Though the recipe has been changed and adapted outside of Mexico, the true taco found on almost every street corner in Mexico is a small wheat tortilla topped with meat, fresh cheese, avocados, fish and/or salsa. Wrap them up yourself and get messy. Cost depends on filling and location, but typically they cost a dollar and most will need 2-3 as a meal.

The Ecuadorian tamale is one of the tastiest street snacks. Wrapped inside a banana leaf, one finds a stable of cornmeal mixed with all manner of extras including vegetables, fried meats, spices, eggs and occasionally shrimp. It costs a couple of dollars, but one should be sufficient as a meal.

The cold nights in Peru’s high Andes means hearty fare is the order of the day. On most street corners, Andean women dressed in traditional garb patiently sear meat on a plancha. Look out for antichucho signs. $2 will get you enough mixed meats and fried potatoes to fill you up. 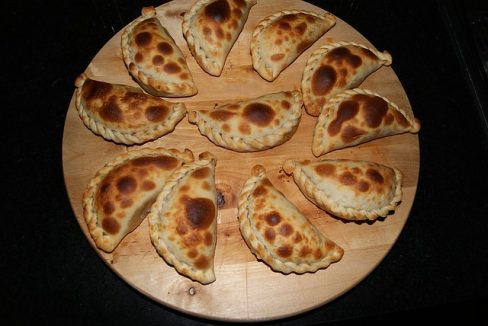 A stable street snack across South America. Like the UK’s Cornish pasty, the empanada is a baked (or fried) pastry filled with meat, cheese, vegetables or occasionally seafood. You’ll probably need two or three to fill up, but at around $1 each, it’s still going to be a cheap meal. Look out for special street carts selling empanadas or go into any bakery.

While most visitors chow down on tacos (and why not, they are seriously good), those in the know also seek out tlayudas con carne. Crispy tortilla discs are topped with cheese, meats, avocado, salsa and a spicy dressing. They are a little more expensive then tacos, but larger and well worth the extra cost. Originating in Oaxaca, tlayudas con carne can now be found all over.

Latin America’s love sweet food, especially the Guatemalans. Buñuelos are small fried doughnut-like balls covered in sugar and syrup. They are particularly popular around Christmas time and cost a dollar or two for a plate of several. They might not be enough to fill you up, but make for the perfect finish to your street food dinner.

Brazil tends to be more expensive than its neighbours, so finding those cheap eats is going to save you a heap of cash. Fortunatly, Brazilians have one of the world’s great street snacks – the pastel. A pocket of thin pastry is filled with all sorts of fillings, typically cheese, eggs, meat or seafood and fried to perfection. Yum. Each costs around a dollar, so they’re cheap enough to indulge on a few should you be hungry.

Carimañolas are seriously popular all over Panama. Yucca is boiled, mashed, shaped into oval balls and stuffed with meat and eggs before being fried until crisp. Their popularity mean these little fried balls are easy to find and cost under a dollar. 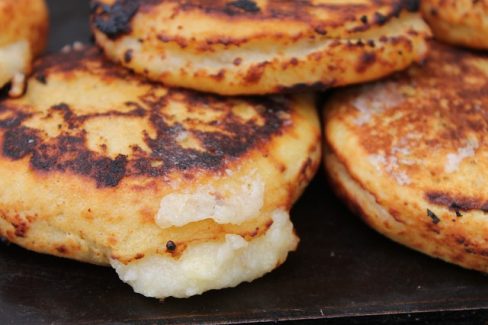 Arepas are a national institution in Venezuela. Street carts are packed with hungry workers throughout the day. Flat baked rolls made from ground maize are cut in half and filled with grilled meats, chicken, avocados, cheese, fish or vegetables. Sometimes they are toasted or fried to add texture. At around $3 for an arepa, they are one of the more expensive street snacks in Latin America, but they are also more substantial.

Argentina is not known for its vegetarianism. You’ll be hard pushed to find vegetables or salad in such a meat-loving country. Perhaps the best-known street snack in Argentina is chorizo, a slightly spicy sausage, grilled over a parilla barbeque and often served in a bun along with chimichurri sauce. For under $3, they won’t break the budget either.

Though it may not sound that good, and it’s certainly not very good for your health, chicharróns are delicious. Much like pork scratchings in the UK, chicharróns are fried pork rinds. Salty, greasy and tasty, these scrumptious morsels cost just a dollar or two and make for a quick snack on the run.