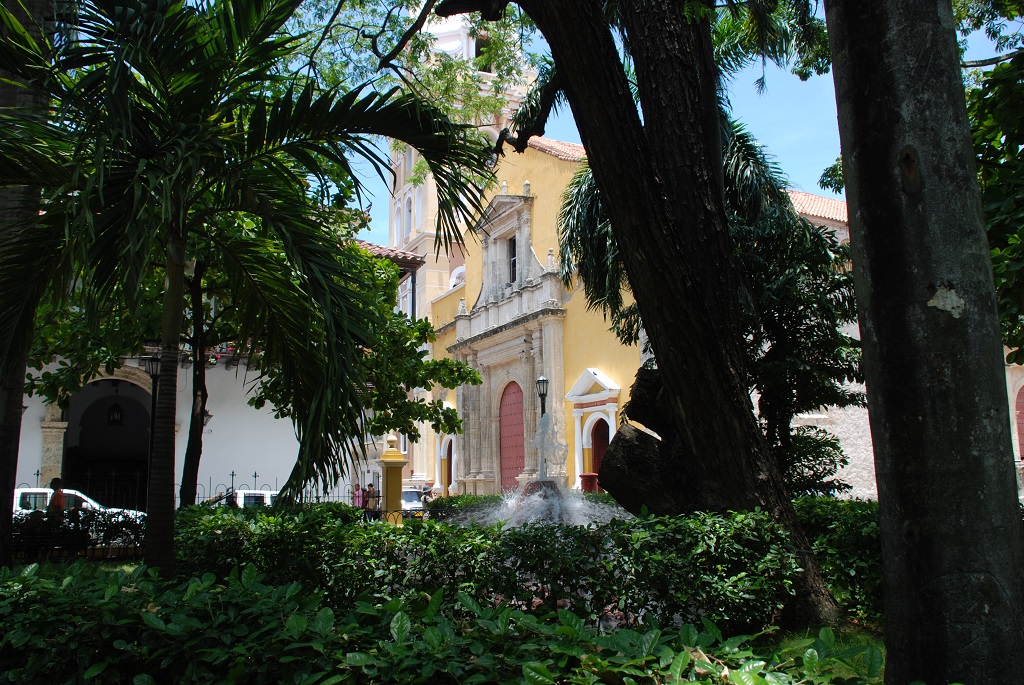 Cartagena is a beguiling tropical port steeped in history and culture. The city lies on Colombia’s Caribbean coast. It was an important trading post for the Spanish from the sixteenth century onwards. Much of the Gold and silver from Peru made its way from here. This made it attractive for attacks by pirates and buccaneers including Hawkins and Drake, so a huge fort and wall was built around the city. Under the Spanish and later Colonial government the city grew and became a religious centre. Today there is much to see wandering around the brightly painted buildings, cobbled streets, hidden squares, flower adorned balconies, cafes and bars. There are white sun-drenched beaches nearby and a short boat ride to the resorts of Barú and coral fringed Rosario Islands.
For a bespoke trip to Colombia send in our Trip Planner form.
Photo Copyright David T Horwell

Related: A Guide to Street Food in Colombia

At nearly 9,000 feet above se level Quito will take your breath away. The city built on the side of volcano Pichincha, has a permanent spring-like climate all year round. It was the second city built by the Spanish in South America and was the first city to become a World Heritage Site. Though nothing remains of the Inca civilization, the Spanish colonial centre has been painstakingly restored. White-washed churches and monasteries abound, narrow cobbled streets are built for wandering. It is a lived-in city with bars, hotels and restaurants and shops with local handicrafts on offer. Take a tour of Ecuador and Galapagos with a stop in Quito.

The historic centre of Panama City has been transformed over the last decade. Once a gang-ridden no-go area, it is now very safe to wander around the cobbled streets and enjoy the plazas, churches and fortified seawall. Boutique hotels are springing-up in restored mansions and many bars, restaurants and jazzy nightspots serving gourmet food and craft beer. It is worth a day at least to explore the museums and galleries. The street markets are great for picking up colourful craftwork such as embroidered molas from the indigenous Cuna of the San Blas islands. View our Panama holiday ideas.

Antigua boasts a beautiful setting, surrounded by volcanoes. Once the capital of Spanish Central America, this wealthy city has palaces, monasteries on every corner. There are many baroque churches decorated with fine art. Sadly many of these architectural gems were destroyed by an earthquake in 1773 which ended 200-years reign as Guatemala’s capital. Many of the building have since been restored, among them the famous La Merced church. Antigua remains the main centre for elaborate Holy Week celebrations and processions. The cobbled street maintain an old-world charm. If feeling energetic, you can hike up nearby active Volcano Pacaya. View our Guatemala holiday ideas.

Leon was Nicaragua’s capital, founded in 1524. Like Antigua it was partially destroyed by a natural disaster, this time a volcanic eruption in 1610. Walking around the pastel-coloured centre you can get an idea of the grandeur. The Cathedral remains the largest in Central America, well worth climbing up to the roof for the views. Large murals depicting the revolution bring to life more recent history. Chill-out in the main square and eat like a king for next to nothing in the central market. For adrenaline junkies take the trip to sand-board down the slopes of nearby Cerro Negro volcano. View our Nicaragua holiday ideas.

Paraty is a gem of a town on Brazil’s Green Coast about 4-hours’ drive from Rio. Set among verdant hills of the Atlantic forest around a charming bay. Once a place for exporting diamonds and gold, today is a World Heritage Site. The cobbled streets of the historic centre are car-free, and the colourful Portuguese architecture is lovingly restored. There are plenty of restaurants with fresh seafood and boutiques for browsing. Relax by the ocean or take a hike into the hills, or a yacht cruise to nearby uninhabited islands. Paraty features on our Cultural tour of Brazil.

Guanajuato was once a rich silver mining town and today is a vibrant university city. Colourful houses dot the hillsides in all shades of yellow, pink, cobalt or coral red. Often visited together with nearby San Miguel de Allende, it is worth a linger. It also has World Heritage status but has not been completely restored like its neighbour. The student population means there are plenty of bars and cheap eating spots and art galleries. The best way to enjoy the city is on foot, taking it slow through the flower-laden plazas or cool off by a fountain. The riches from the silver can be seen in the huge baroque churches such as the basilica. During Holy Week the city is a place of pilgrimage for Mexicans, so book early. The muralist Diego de Rivera was born here, and his house is now a gallery for contemporary artists.

See our Colonial tour of Mexico.