A Quick 5 Minute Guide to Brasilia

Brasilia is the capital of Brazil. It is located inland and is somewhat unique in the country and is was fully planned and created from scratch in the 1960s. Behind the city’s design is urban planner Lucio Costa and the architect Oscar Niemeyer and the artist Athos Bulcão. It’s often overshadowed by the more touristy coastal cities of Rio de Janeiro and Recife, but those who decide to visit find a wealth of attractions, restaurants, nightlife and culture.

– The city was founded on the 21st April 1960
– The population is 2.5 million
– It was designated a UNESCO World Heritage city in 1987
– It played host to the world cup in 2014
– It is the fourth most populous city in Brazil
– If looked at from above, the city is shaped like a bird

Due to the city’s relative isolation from other parts of the country, the only practical way to get there is by flight. Flights from Rio de Janeiro, Sao Paulo and Salvador take roughly two hours.

Try the Melia Brasil 21, probably the finest hotel in the city. Located between the Television Tower and City Park, it’s also in the best location for exploring Brasilia. All the rooms at this 5* property are spacious and include all the features of a luxury modern hotel. The Norton Grill serves up delicious grilled meats and international cuisine and the Churchill lobby bar serves a wide range of wines and cigars. Other on-site amenities include a fitness centre, sauna and a stunning rooftop swimming pool with incredible views over the city.

The restaurant Feitiço Mineiro celebrates the cuisine of Minas Gerais. The food here is delicious. Think suckling pig with creamy spiced beans and farofa or grilled chicken accompanied by okra and corn mash. The restaurant was created by Jorge Ferreira in the late 80s. His passion for culture, music and literature shows in the restaurants décor. Although Ferreira sadly passed away in 2013, the restaurant continues the traditional of live shows and music concerts at the venue.

There are plenty of things to do in Brasilia. Tours can be organized by bike, car or by foot. One of the best ways to see the city is on an architectural masterpieces circuit tour with a local English speaking guide, photographer or artist. During the tour you can explore the avenues, gardens and buildings that make this city so fascinating. Brasilia is located next to the Chapada dos Veadeiros, an amazing landscape to explore. Try taking a scenic flight over the national park in a hot air balloon. 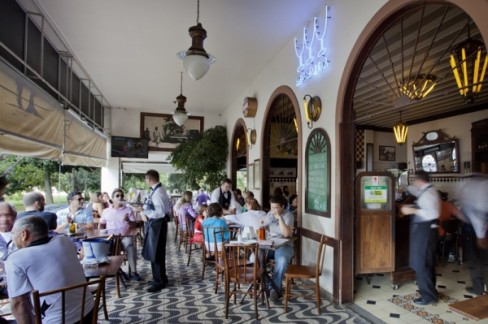 The Bar Brasilia is a favourite amongst locals. Known for having the best draft beer in town, it’s the perfect meeting point after a day of exploration. Although (like everything in the city), the bar is relatively new, it’s traditional wooden bar and tiled floor will transport you back to a bygone era. If you’re feeling hungry try the delicious cod cakes.

To begin your adventure to Brasilia get in touch.