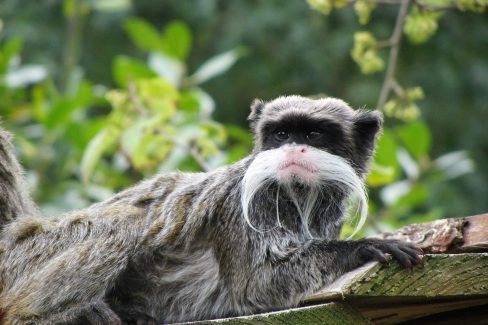 The are several species of tamarin monkeys that live in the Amazon Basin, but one of the most common is the emperor tamarin or saguinus imperator. Allegedly named for its resemblance to the German emperor Wilhelm II. They reside in the tropical forests around Peru, the west of Brazil and parts of Bolivia. Most of the tamarin’s fur is grey and black with little yellowish patches and a brown tail, but its most distinctive feature is its magnificent white moustache which extends out and curls downwards from its nose.

Typically, an emperor tamarin will reach a body length of around 25 centimetres with a strong tail that extends out a further 35 centimetres and weighs in just under half a kilo. They live together in groups of between 2 and 8 individuals led by the oldest female in the dense tree-covered tropical forests. Most of their days are spent swinging around in the trees, grooming each other to build bonds and rarely dropping to the forest floor where they are vulnerable to attack from predators.

Like the other species of tamarins, emperors are omnivores living off at diet of tropical fruits that can be found in abundance, some flowers depending on the season and their location, sap they’ve managed to prize out of trees and the odd insect. When they’re feeling hungry, they might go after tree frogs or cheekily steel the bird eggs when the parents are away from the nests. There small size, agile bodies and useful tails are an advantage making it easy for them to clamber along to the end of thin branches inaccessible for larger mammals. When the dominant female creates a troop to scavenge for food, they are known to work alongside other species of tamarin.

The gestation period for tamarins is roughly the same across the board and females give birth after around 140 to 150 days. Interestingly, they almost always birth twins, though triplets are not that uncommon. Afterwards, both the female and male are involved in the care of their young. The males will scavenge for food and carry the little ones, while the females help with feeding. After 3 months, the young are weaned off milk and start to eat solids. These are the most dangerous months for the young when the there is a high risk of falling from the canopy. If they do survive, they quickly mature and after 2 years they usually set off to build their own group living for more than 15 years.

In the wild, there are some concerns to the declining population which is affected by human encroachment and deforestation, though they are no yet listed as endangered. There are several locations like the Manu National Park where tamarins thrive. Interestingly, these social creatures are known to seek out human interaction when in captivity and there are reports from zoos that the critters like to be stroked and petted.