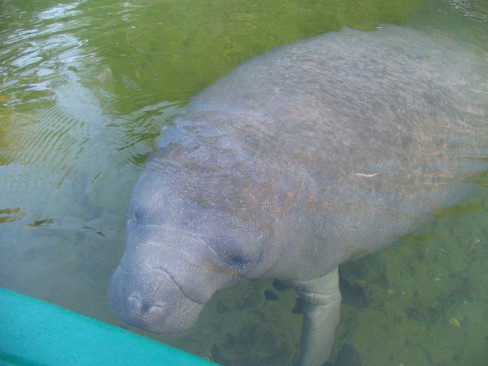 The Amazonian Manatee has got to be one of the most intriguing looking mammals in Latin America. They live in the rivers, tributaries, lagoons and black-water lakes of the Amazon basin reaching Peru, Guyana, Colombia, Ecuador and Brazil. They spend their whole life underwater, occasionally pushing their nostrils out of the surface when looking for food. These majestic creatures are large – some reaching 2.8 metres in length and weighing in at a half a ton but unfortunately due to hunting numbers have severely dropped and they are becoming increasingly hard to spot.

Manatees are herbivores, living entirely off aquatic plants. They store up food during the wet season eating up to eight percent of their bodyweight each day and return to the larger rivers in the dry season where they fast burning the food stored in their fat reserves. They tend to live in small groups of four to eight but some have been found living along. Manatees tend to give birth to a single calf.

Get in touch if you would like to organise your own tour to the Amazon Basin to view these incredible creatures.

RELATED: 10 things to do in the Amazon