WHO WAS PABLO NERUDA? 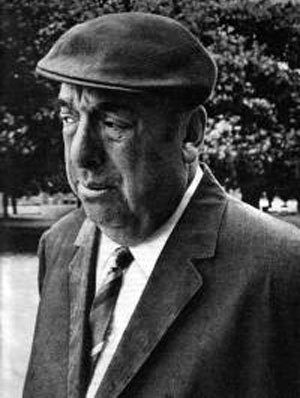 Pablo Neruda was born on 12 July, 1904, in the town of Parral in Chile, the son of a railway worker and a teacher. The poet, whose real name is Neftalí Ricardo Reyes Basoalto, grew up in Temuco. From the age of thirteen he contributed to newspapers. In 1920, he became a contributor to the literary journal Selva Austral under the pen name of Pablo Neruda. Some of the poems he wrote at that time are found in his first published book:  Crepusculario (1923). The following year saw the publication of Veinte poemas de amor y una cancion desesperada, one of his best-known and most translated works. Neruda studied French and pedagogy at the University of Chile in Santiago. Between 1927 and 1935, he was given honorary consulships, which took him around the world. Neruda was appointed consul in Paris in 1939, and then posted to Mexico, where he rewrote his Canto General de Chile, transforming it into an epic poem about the whole South American continent. In 1943, Neruda returned to Chile and he was elected senator of the Republic in 1945, also joining the Communist Party of Chile. Due to his protests against President González Videla’s repressive policy against striking miners in 1947, he hid in a basement for two years escaping to Europe in 1949, returning home in 1952. Years later, Neruda was a close advisor to Chile’s socialist President Salvador Allende.  Neruda was ill at the time of the Chilean coup d’état led by Augusto Pinochet. On 23 September 1973, Neruda died of heart failure. Neruda’s death was announced around the world. Pinochet denied permission to make Neruda’s funeral a public event. However, thousands of grieving Chileans disobeyed the curfew and paraded in the streets.

RELATED: These 21 quotes prove that Chilean poet Pablo Neruda was a hopeless romantic