5 Natural Wonders You Can See In Chile’s Atacama Desert 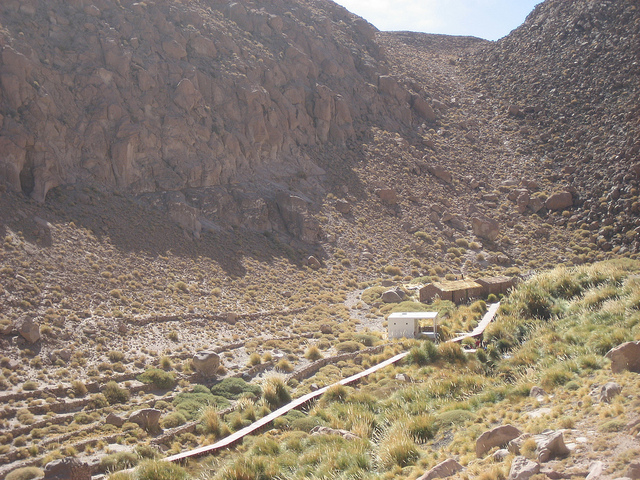 The Atacama Desert in the north of Chile covers an area of 1,000 kilometres of land between the Pacific coast and the Andes. It is the driest desert in the world other than the Polar regions. Most explore the region by using the little town of San Pedro de Atacama as the base. A visit should be for a least three full days and will include visits to the most of the following natural wonder.

El Tatio Geysers is the largest geyser field in the southern hemisphere and the third largest in the world, as well as being one of the highest at 4,350 metres above sea level. There are over eighty active geysers, the highest of which erupts steam to over six metres. The name means oven in the Quechua language. You’ll need to get up early to see this natural wonder, tours depart around six in the morning.

Valley of the Moon

Located very close to the town of San Pedro de Atacama is the Atacama Desert. This bizarre landscape made up from varying colours of stone and sand formations make it look somewhat like the surface of the moon, hence the name. This desert area is one of the driest places on earth. No rain has dropped here in over a hundred years. Interestingly the area was used for testing the Mars rover prototype. Tours here usually arrive in the afternoon allowing for some time to explore before watching the incredible daily sunset.

After a day of exploration, the Termas Baños de Puritama is the perfect place to relax. Now owned by the Explora hotel chain, these eight hot pools created from geothermal spring waters from the Atacama Desert canyon and 30 kilometres of so from San Pedro de Atacama.

Another one of Chile’s most amazing natural wonders, the Salar de Atacama (salt flats) are the largest Chile at over 3,000 square kilometres. Amazingly as the sunsets and the temperature drops sharply, the salt cracks forming clusters. It is also home to many species of birdlife. It is located within Los Flamencos National Reserve.

Two more lagoons in Los Flamencos National Reserve are the Miscanti and Miñiques Lagoons. There two lagoons were separated by a lava flow. Much wildlife can be seen in the area including Andean and Chilean flamingos, silvery grebe, Andean gulls, Andean foxes, vicuñas, Andean foxes and Darwin’s leaf-eared mouse.

Arguably one of the best times to visit is during the desert flowering phenomenon that occurs between September and November. Although most of the region receives little to no rainfall, the El Niño causes a band of warm ocean weather along the coast which causes a little precipitation in the southern part of the desert. This germinates the dormant seeds producing a sea of wild flowers.

See our tours to the Atacama Desert here.

RELATED: 8 Amazing Journeys You Should Take In Chile