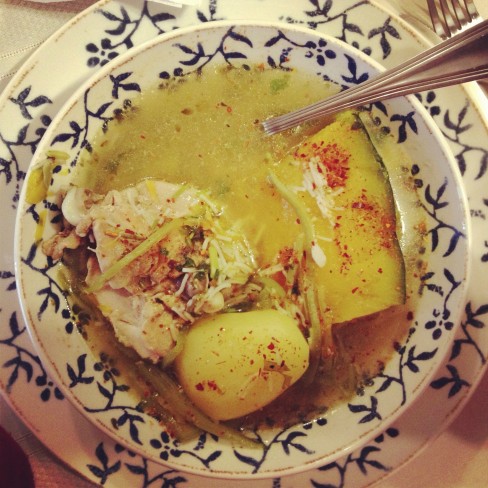 Cazuela is the name given to certain dishes in some countries of South America, where ingredients such as meat and vegetables are mixed and cooked in a casserole dish, resulting in a delicious hearty soup/stew. The dish has been named after the Spanish cooking pot cazuela in which is usually cooked.

In Chile, this tasty warming soup is the national dish and although the most usual types of cazuela are made of chicken and beef, it can also be prepared with lamb, pork or turkey. The cazuela is a home cooked inexpensive dish usually eaten in the rural areas during winter time, however, these days it has become part of an all-year-round menu for all Chilean families.

For Chilean people, it is more than just a dish, for them it means home. Making this tasty dish is very simple.

Method
Heat a medium casserole dish on a medium heat and fry the chicken for a few minutes until is golden brown. Add the sliced onions and garlic cloves and fry with the chicken for another minute. Add 1 ½ litres of water and cover until boiling. Add the carrots, potatoes, squash, corn and rice, and salt and pepper to taste and cover until it is boiling again. Reduce the heat, cover and simmer for 20 minutes or until the chicken is cooked through. Serve in a bowl with plenty of chopped coriander on top and enjoy.