A guide to Santiago street food

Whichever part of the world you’re in, humble street food has always been the place to look for the best eats. Forget fancy restaurants and gourmet cuisine, it’s on the streets where you’ll find the people’s food. Santiago is no exception where the high footfall metro stops around Santa Ana, Baquedano and Cal y Canto have some mouth-wateringly good food. Alternatively, as night begins to close in, make a beeline for Bellavista where the delicious things are cooked along the streets until the early hours.

Completo’s are Chile’s answer to the American hot dog, just better and twice the size. A large boiled frankfurter sausage placed between bun is where the comparison ends. The basic completos are then loaded with freshy chopped tomatoes, mashed lemony avocado and lashings of mayonnaise. You can then create your own bespoke hot dog. Some add sauerkraut, others fried onions, French fries and fried eggs. If you’re looking to soak up the night’s boozy intake, try the completo with potatoes and cut meats and avoid the hangover the next day.

Typically served during the summer months, the mote con huesillo is a traditional non-alcoholic drink made from unhusked wheat grain, dried peaches and peach juice simmered with sugar and cinnamon. It’s seriously sweet with an interesting texture provided by the soaked wheat and makes for a meal all by itself and the use of a spoon is necessary. Look out for varieties sold from rolling vendors who sometimes replace the sugar with honey and use dried prunes instead of peaches. 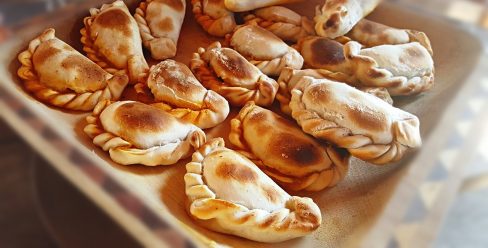 Empanada’s a stable all over South America. Much like a British pasty, warm, flaky pastry encapsulates a savoury filling of minced beef (pino), onions, olives and some hard-boiled eggs. Occasionally, you’ll find varieties that include raisins and it’s not hard to find vegetarian empanadas filled with a spiced potato and vegetable mix or even seafood empanadas. The ones found on street stalls have already been oven baked nearby, so look out for empanadas hot and fresh out the oven.

If you’re looking for anticuchos, just follow your nose. The smell of roasting meats emanates along the most streets in the Chilean capital so they aren’t difficult to find, particularly at night. Typically, chunks of beef, though chicken and pork are not uncommon, are marinated in a heady mix of chillies, cumin and garlic vinegar before being barbecued over smoky coals. For some of the best brochettes, seek out the vendors around Cal y Canto and La Vega. 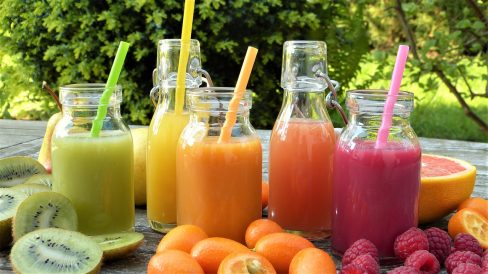 There’s seemingly a juice seller on every corner of the city. These rolling street vendors can blend up your very own bespoke juice with combinations that include passion fruits, oranges, apples and bananas as well as seasonal and exotic fruits. If you’re looking for a healthy kick, try adding in a little carrot. They’re an inexpensive way to rehydrate on the move during the summer months. 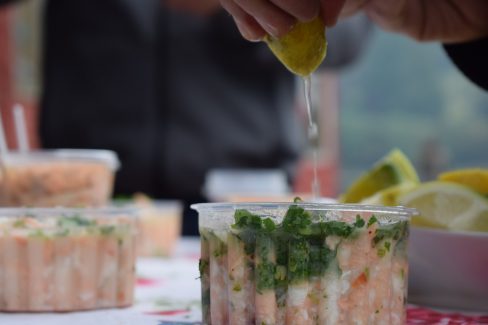 Most Latin American countries make ceviche in some form of another. Chile’s long coastline provides a never-ending abundance of top quality fish making theirs some of the finest. Firm white fish sometimes with the edition of prawns or even squid are marinated in a zingy mix of citrus juices until translucent and ‘cooked’. It’s often complimented by soft cooked sweet potato, slices of red onion, chopped coriander and crunchy Chilean corn. Best eaten accompanied by one of Santiago’s pisco sours.

If you’ve got a sweet tooth, make a beeline for one of the sopaipilla stands where discs of fried dough made from sweet potato and flour are topped with lashings of indulgent dulce de leche. They also sell savoury versions where a zingy blend of coriander, chopped tomatoes, onions and a dash of chilli sauce works perfectly with the crunch of the sopaipilla. At around 20p each, they won’t break the bank either. Go on, have another.

If you spot one of the churros stands in Santiago, make a quick dash because they sell out quick. The chewy, crunchy fried doughnut-like treats originating from Spain are popular here. While in Europe they are often served with thick hot chocolate, in Chile, when they come out the fryer they are lightly dusted in sugar and dipped in rich dulce to leche caramel. Bliss.

Ready to start diving into Santiago’s street food scene? Call one of our Chile experts on +44 (0) 207 1478 or email us here to start planning your foodie tour of the capital.

RELATED: 8 Amazing Journeys You Should Take In Chile