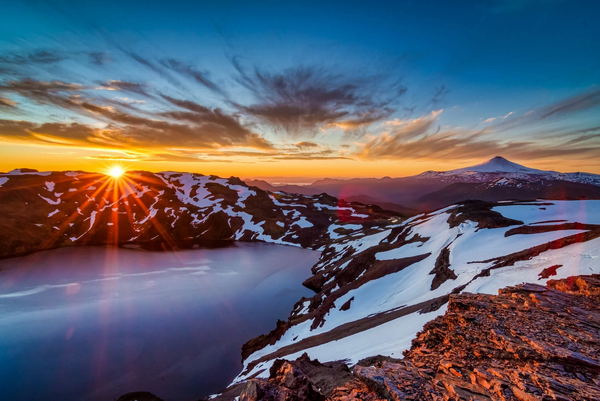 Chile has more volcanoes than just about any country. Around 2000 volcanoes, and 92 are considered active. Only recently there were eruptions of the Villarica (2015), Calbuco (2015) and Chaitén (2008) all threatening the local populations.

Geologists from the University of Chile made the discovery whilst studying the Liquiñe-Ofqui Fault. This lies in the Chilean Northern Patagonian Andes. in the Aysén Region. The team of geologists had no idea they would make a major discovery. “During a helicopter flight, we could see the difference in colour between basaltic rock, which is produced in an eruptive event, and granite rock, which forms inside the earth,” says geologist Gregory de Pascale. The team named the volcano “Gran Mate” in honour of South American culture. The shape of the volcano looks like a gourd used to drink the mate herb, a hot drink popular in Patagonia. The volcano is estimated to be less than 5,000 years old.

Where is the Gran Mate volcano located?

The Gran Mate volcano is 80 kilometres away from Coyhaique city and 1,600 south of Santiago de Chile. It is in the middle of the fault, a wilderness area, difficult to access. The mountains in the area are covered with snow about 10 months a year. Chile’s Aysén Region is one of the most beautiful areas in the country. It is famous for the Carretera Austral (Southern Highway), a road that snakes south for about 1,240 km (770 miles) from Puerto Montt to Villa O’Higgins. The road goes through sparsely populated areas and is the best way to access some spectacular national parks like Queulat, Patagonia Park and Pumalín. Nor far lies the Cerro Castillo Reserve, home to one of the most stunning trekking routes in South America.

What is Special about the Gran Mate volcano?

The volcano is in a very remote area and reaching the mountain by foot is an odyssey. It took years for geologists to confirm the presence of this active volcano here – geologists started flying above the area in 2015. The volcano rises to 1,280 m above sea level (4,200 feet) – like Vesuvius in Italy. The caldera of the volcano has a diameter of 5 km. Due to tectonic movement, earthquakes are expected to occur in the area, so the volcano’s activity will be closely monitored. The area is the meeting point of the Antarctic and the Nazca plates with the South American plate. There is a lot of tectonic movement, where the Antarctic and Nazca plates collide with the South American plate. The earthquakes and volcanoes occur along the Liquiñe-Ofqui fault in southern Chile, and Mate Grande is right in the middle. Other active volcanoes can be found nearby like the Hudson volcano that erupted in 1991 – one of the most violent eruptions in the history of Chile.

Are the volcanoes in Chile dangerous?

14 active volcanoes in Chile are considered high risk. Some of them are in populous and touristic areas, like the Villarica, Calbuco, Nevados de Chillán and Osorno volcanoes. The good news is that the activity is closely monitored and there is a very efficient system of emergency alerts. In case of a violent earthquake or dangerous eruption, one would be informed within seconds by the National Emergency Office. An eruption would rarely happen without warning, so don’t worry about travelling to this beautiful part of South America. If you want to travel to Chile’s beautiful volcanoes, you can go to Chile’s Lake District and hike near the stunning Osorno volcano, travel to the volcanoes of the Atacama Desert or even Ski near the epic Lonquimay volcano in Chile’s Araucanía Region. Alternatively contact us for a tailor-made trip.