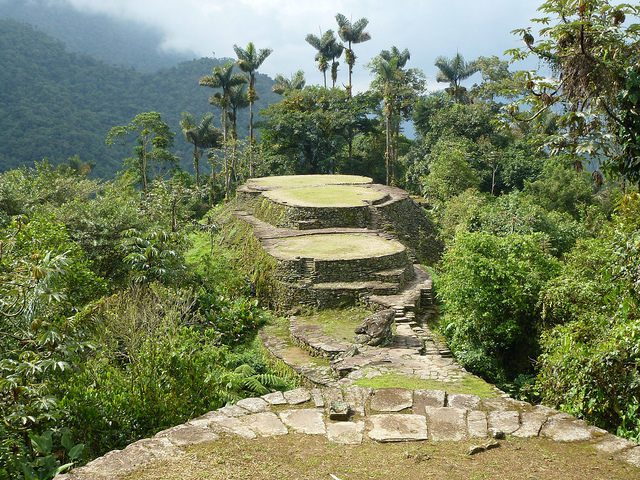 The Lost City (or Ciudad Perdida) is Colombia’s Machu Picchu. This ancient city located in the Sierra Nevada, was founded in 800 CE, many centuries before Machu Picchu even existed.

Unlike Machu Picchu which can be reached by train, a visit to the Lost City requires a challenging 44 kilometre, four-day jungle trek across rivers, dense jungle and steep climbs. A good level of fitness is a must in order to complete the journey. Although some adventurous travellers make this journey themselves, a guide is recommended. Not only will a guide mean you won’t get lost, but they also set up camp, cook food, help spot and identify wildlife and impart fascinating knowledge about the history of the Lost City.

Many local tribes have long known about the site, but the Lost City was first discovered and brought to international attention in the early 70s when a group of looters stumbled across it during an expedition. As the local black markets were flooded with ceramics and ancient gold, archaeologists from the Instituto Colombiano de Antropologia went to the site and spent 6 years protecting and reconstructing it.

It’s thought the city was the region’s cultural, political and manufacturing centre during its peak when it was home to 8,000 people. Like Machu Picchu, the city fell and was abandoned when the beastly Spanish conquistadors arrived in the 16th century. The city is built upon hundreds of terraces carved into the jungle’s hilly interior and linked with a network of paths and plazas. The advanced civilization built a series of bridges and drainage systems that help mitigate the damage that the common tropical rainfall would otherwise do. It’s only accessible by a thousand-step climb up through dense jungle.

Although the site is now completely safe to visit, the region was once inhabited by the left-wing rebel groups, Revolutionary Armed Forces of Colombia (FARC) and the National Liberation Army (ELN). In 2003 eight foreign tourists were kidnapped during a visit to the Lost City, although they were released three months later. The conflict and inhabitation of these rebel groups and logistically difficulty of reaching the site was probably why it has never hit the same tourism numbers of Machu Picchu in Peru.

RELATED: A guide to the best street food in Colombia