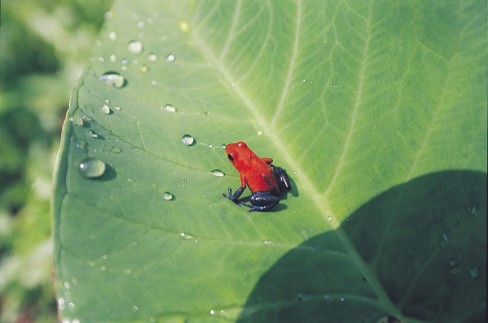 Poison dart frogs have long been used by tribal peoples of South America. They learned that rolling a blow-dart tip over a live frog’s skin creates a coating of poison that can paralyze any animal, making it easier to hunt. The frogs not only taste vile but will also kill any predator that eats them. The frogs accumulate the toxin from their diet of termites, ants, and beetles. The frogs are immune to their own poison, which is stored in its skin glands for years. The tips of arrows and darts soaked in these toxins can also keep their deadly effect for over two years. The effects can vary from irritants to hallucinogens, nerve poisons, and vasoconstrictors; some are so powerful that they can lead to fibrillation and heart failure. Most are found in Central and South America, but many are endangered due to disappearing habitat. Poison dart frogs all have bright colours, to ward off potential predators. Their toxins can have valuable medicinal uses, such as anaesthetics and researchers have developed a synthetic compound that shows promise as a painkiller more effective than morphine, but non-addictive. Hopefully these medical properties will mean we will value these tiny, yet incredibly beautiful amphibians much more, so future generations will see them in all their glory. On our Wonders of Nature and Man tour to Panama and Costa Rica you can visit Red Frog Beach, named after this colourful resident.