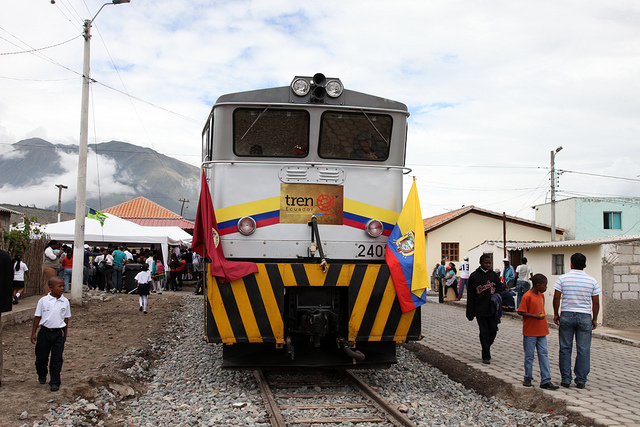 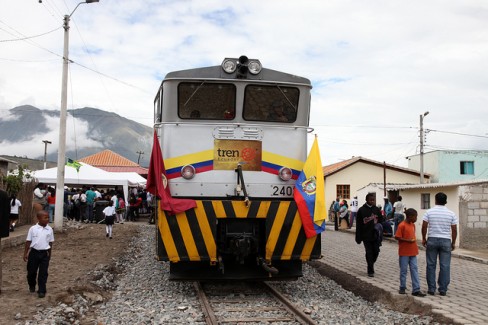 I recently rode on this fun train that winds through the Andes of northern Ecuador. The train starts right in the middle of the town of Ibarra, the streets stop and the people wave as you go along right through the bustling market. The bright red carriages are like something out of Thomas the Tank Engine, but sadly no longer steam driven.

Ecuador’s train network began in the late 19th century; however it wasn’t until 26 August 1957 that the route from Ibarra to San Lorenzo opened. This gave the indigenous communities an outlet to the Pacific which in turn brought them closer to the Panama Canal, one of the world’s commercial hubs. I first took this route in the mid-80s, but it was already falling into disrepair and I remember the ‘bus on rails’ that frequently came off the tracks and had to be levered back. Quicker roads and lack of Government support meant a slow decline.

The last ten years have seen a resurgence in the Ecuadorian train network, partly due to the number of tourists rising and the fantastic routes on offer and the personal vision of the president. The Ibarra to Salinas route is now called the Tren de la Libertad (Liberty Train) is named after the struggle from independence from Spain two hundred years ago and the freedom of the slaves who ancestors still inhabit the region. This route was originally a commercial one, mainly used to carry goods such as wool, cotton and fabrics down to the ports for exportation to faraway lands.

Open again, it now takes tourists on a wonderful 30 kilometre journey from Ibarra to the town of Salinas and then back again. From Ibarra we passed rugged Andean countryside, along river valleys, crossed wooden bridges and through farms. The most exciting was through tunnels carved through the mountains; this must have been a particularly arduous job for the workmen who just had pick-axes and dynamite.

On arrival in Salinas we were welcomed by dancers from the local lively Afro-Ecuadorians community, descendants of the workers who were brought to the area to build the railway lines. There was time to visit the salt museum, a plaza with handicrafts and have a local lunch before returning back into the Andes. The journey takes around an hour and a half each way, with a stop for local coffee or ice-cream at Yachay. In Salinas I tried a local version of a piña colada using the local sugar-cane rum. It hit the spot.

If you would like to book the Ibarra to Salinas train journey or would like to incorporate it into your bespoke Ecuador holiday then do get in touch. The ideal of choice for accommodation would be the Hacienda Piman.