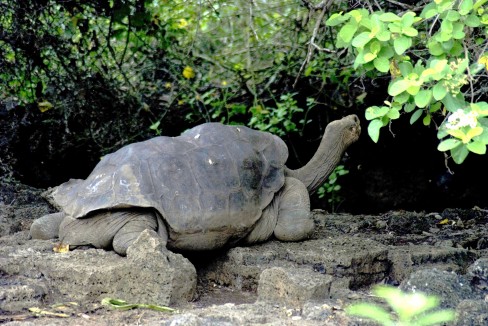 The remains of the body of the giant tortoise ‘Lonesome George’ from the Galapagos Islands has been transferred to the American Museum of Natural History in New York. Lonesome George’s body will be embalmed at the museum during the coming months. Experts say the taxidermy process is going to take between 8 or 9 months. Once completed, Lonesome George will return to the Galapagos Islands to be showcased in museum that will be built on the site where he spent his last 40 years.  After his autopsy, ‘Lonesome George’s’ body was kept in a special freezer until the time came to transfer the body. The Galapagos Park built an insulated wooden box ensuring that the chelonian remained frozen during the 18 hour journey. Lonesome George, was the last remaining specimen of the Pinta Island species, Chelonoidis abingdoni, since its discovery in the wild in 1971. He remained in the care of the park rangers at the tortoise breeding centre in Santa Cruz Island. During that time, many attempts were made to get George to reproduce, but none of them were ever successful. On Sunday June 24, 2012 his body was found dead in his yard, by the same ranger who took care of him throughout most of his years in captivity, Fausto Llerena.