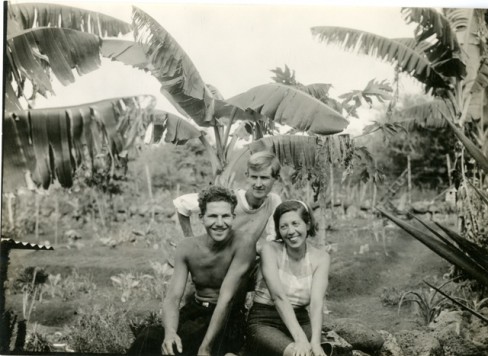 Though Galapagos is well know by scientists and tourists for the unique wildlife and unusual scenery, the archipelago is now getting the Hollywood treatment. Spring 2014 sees the release of The Galapagos Affiar: Satan Came to Eden, by Emmy award winning film makers Dan Geller and Dayna Goldfine, that debuted in the USA in August. The story is more Lord of the Flies than Robinson Crusoe.

The film tells the intriguing true murder mystery based around a group of European settlers on the island of Floreana in the 1930s. During the German Depression in 1929 Friedrich Ritter and his love Dora Strauch eloped to Floreana Island in search of Eden. They were joined by Heinz and Margaret Wittmer and their son, there was no love lost between the two families. The last to join in 1932 was the self-described ‘Baroness’ von Wagner Bosquet who arrived with her two lovers.  More of an exhibitionist than an escapist, she later called herself the ‘Empress of Galapagos’ and posed with a gun and whip for articles in Time magazine. Her intention of building a hotel for rich yachties was never realised. Later paradise took an ugly turn; the baroness disappeared with one of her lovers and another was found dead on an isolated beach. Later Dr Ritter died under mysterious circumstances, leaving Margaret Wittmer and family as the sole survivors. She took the story to her grave surviving until the year 2,000 and a ripe old age of 96.

Stories on the present day Galapagos pioneers as well as spectacular HD footage of Floreana’s landscape are interwoven into the film to create a visually stunning piece. To create your own tale in the Galapagos visit the islands on one of our many small-ship cruises or stay on Floreana on a land based tour.

If you would like to find out more about conservation of the islands please visit Galapagos Conservation Trust.