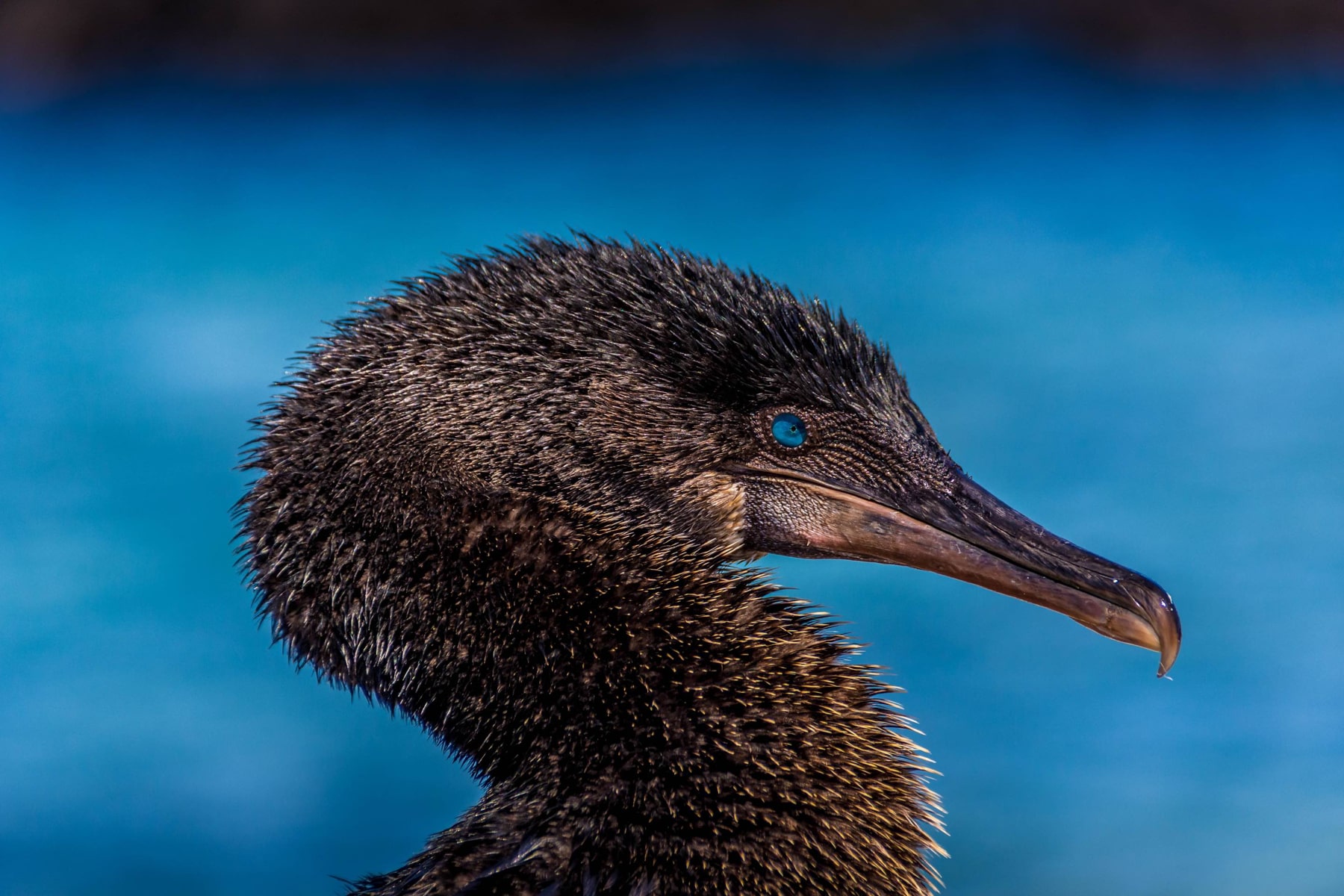 Isabela is the largest of all the islands, over 130km from north to south. It has five of the biggest volcanoes including Wolf the highest of all at 1700m and Alcedo that has the largest tortoise population. Despite its size much of Isabela is barren lava with few places to disembark but when you can the sights are definitely worth it. 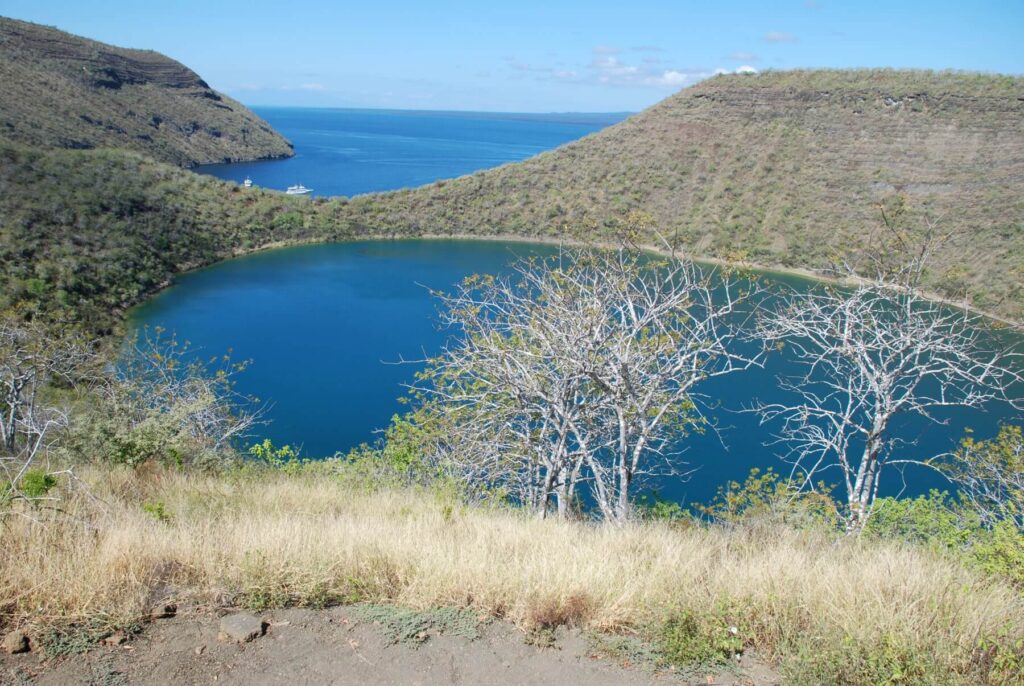 An impressive natural harbour whose cliffs are covered in mariners’ graffiti going back hundreds of years. The trail curves up a steep gully past a circular crater lake and their are good views of several volcanoes at the top. 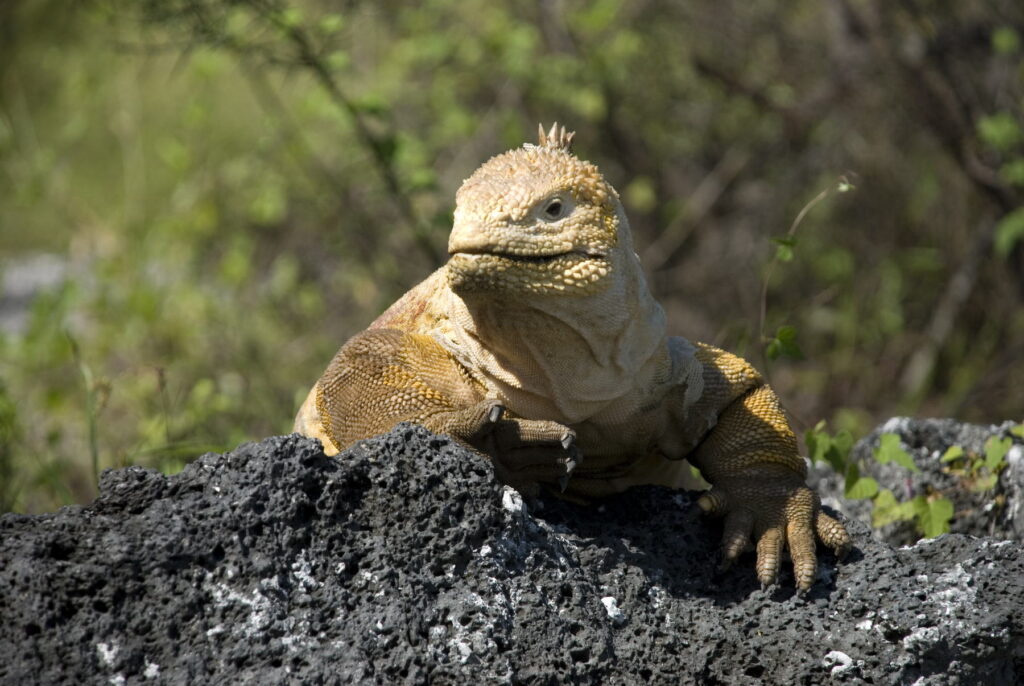 A circular trail leads to an uplifted beach and the remains of a coral reef where you can encounter flightless cormorants, tortoises, land iguanas, hermit crabs, finches, warblers and mockingbirds. A dinghy ride takes you to Elizabeth Bay into a lagoon hidden by the largest mangrove trees in the archipelago with herons, turtles and rays. 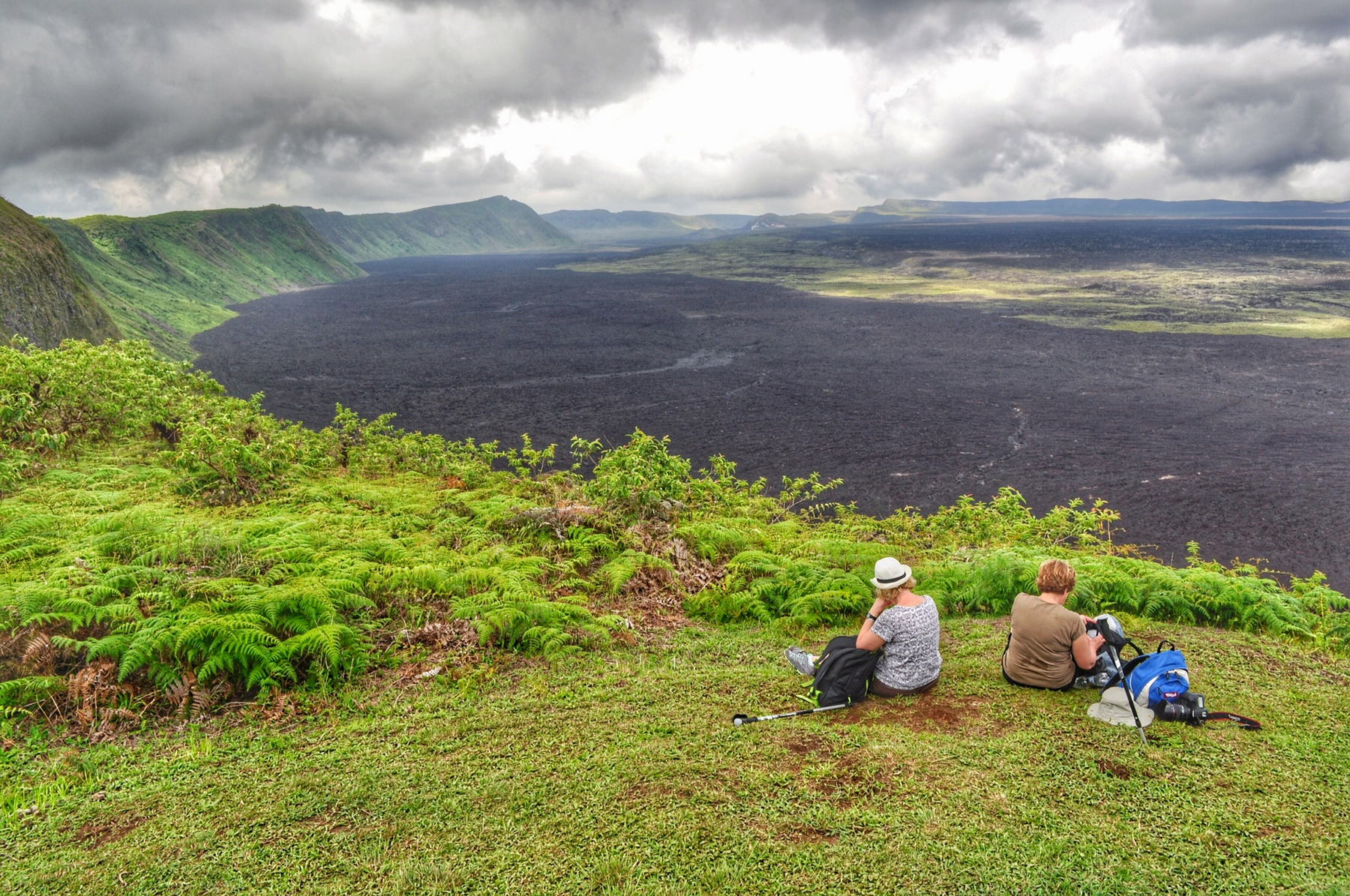 Tours can be organized to this active volcano and its particularly good to get there on horseback. The 10km crater is second only in size to Ngorongoro and you can view steaming fumaroles, vermilion flycatchers and wild donkeys. 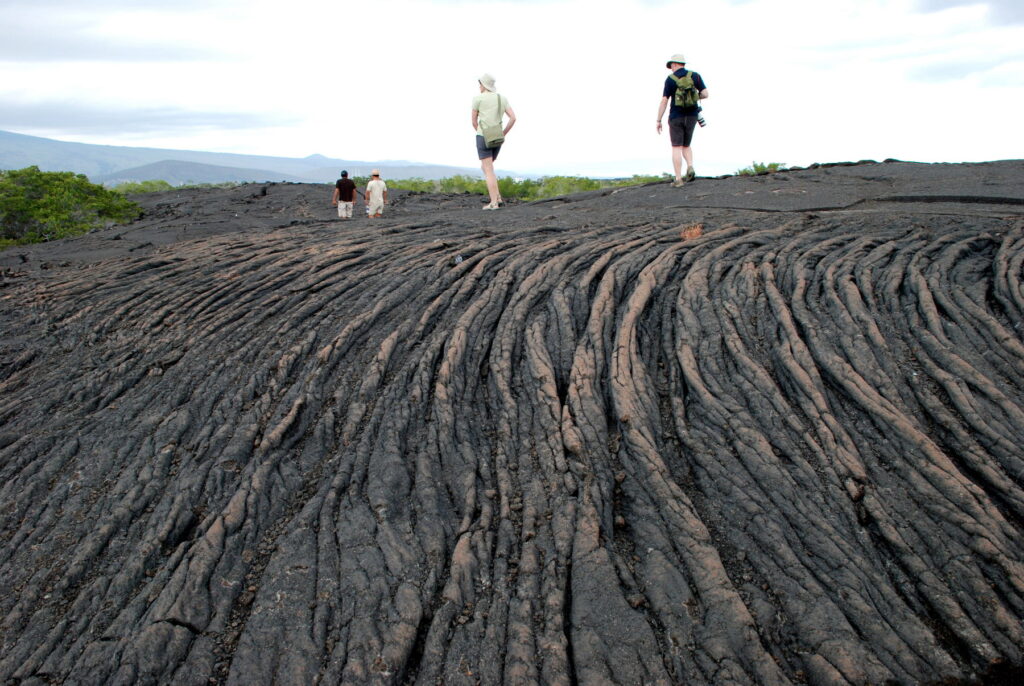 As this is at the extreme north of Isabela, sometimes landings can be tricky during the hot season when the wind is coming from the north. This site is named after the Duke of Albermarle (the island was previously named Albermarle by the English sailors). The coastal area is ideal for dinghy rides among the coves and creeks formed by lava flows that reached the sea. The lava is of the ropey Pahoehoe lava type. The area is fringed by mangroves. 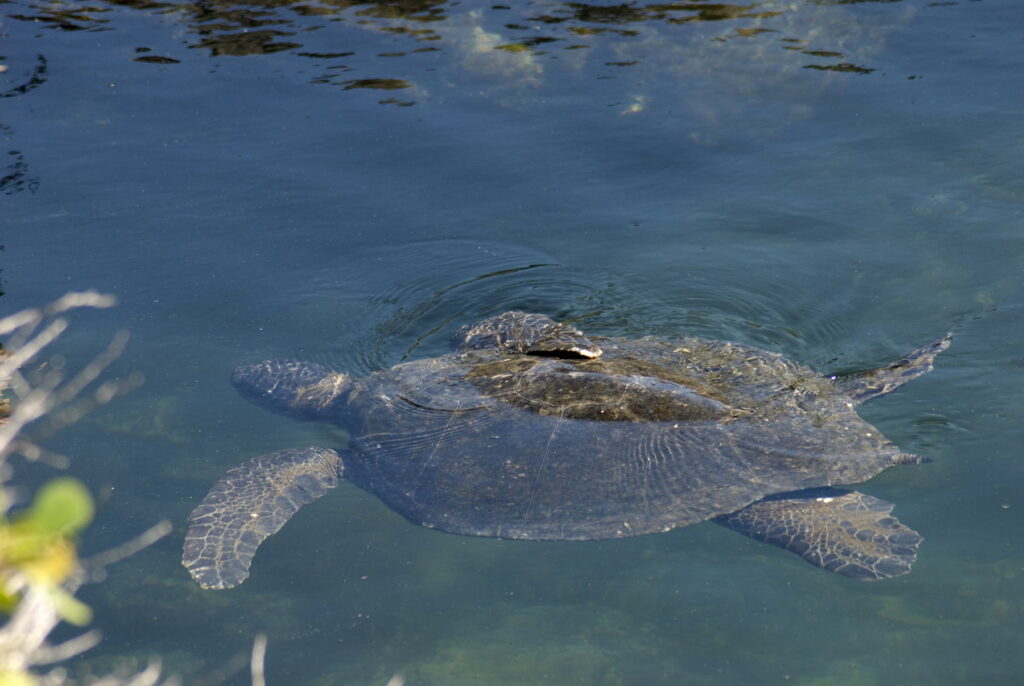 A few miles north of Tagus Cove on Western Isabela is the lesser know site of Black Turtle Beach. The whole area was uplifted by tectonic activity in 1975, causing many of the mangroves to desiccate. The beach is made of black sand derived from volcanic basalt, whilst hot for humans it is favoured by nesting turtles and resting sea lions.


The only town on Isabela was until recently an isolated human settlement, frequented by fishermen and farmers from the hills. Today, though, tour boats call in and there is a small airstrip. Visitors can see Galápagos tortoises in captivity at the breeding centre, while flamingos may be seen at the lagoon near by. 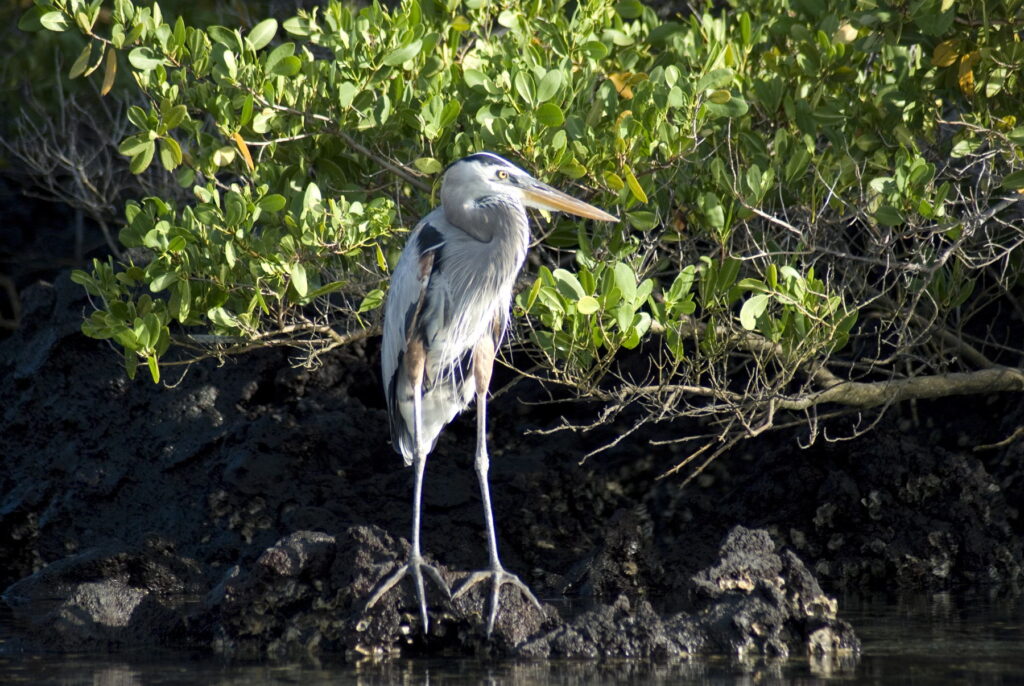 The narrowest part of Isabela is called the Perry Isthmus. On its western side is a marine site (no landing) known as Elizabeth Bay. Yachts anchor a long way out near the islets of Marielas. The panga can take at least 20 minutes to reach the coast. On the way Audubon shearwaters, brown noddy terns and blue-footed boobies can be seen. Along the rocks boobies rest, and marine iguanas congregate. Flightless cormorants are less common.


The wet landing at Alcedo is on to a small beach with coarse, black lava sand. The 20km round trip, which can be extended by a further 12km at the top of the rim to the south to get to the best tortoise area, is strenuous. Wear good hiking boots, leaving wet shoes high up on the beach.


This small islet lies south of Villamil and can be reached by dinghy or by foot at low tide. It is composed of rough, dark lava with fringes of dense mangroves. Near the landing you can see pelicans, the odd penguin and boobies diving off-shore. On one side is a bay with tranquil turquoise waters frequented by sea lions, turtles, marine iguanas and rays. A narrow creek connects to the bay, which is cut-off at low tide. This creek is a great place to get close to white-tipped reef sharks (tintoreras in Spanish), though it is not permitted to swim with them.

Fernandina is probably the largest pristine island in the world  there are no introduced organisms. During January to June the marine iguanas breed and lay eggs in the sand. The flightless cormorants stand around drying their ‘wings’ and offering nesting material to each other. Though low in numbers they seem to be unaffected by human visitors. Nearby tide-pools are a favoured place for Sally lightfoot crabs, great blue herons, oystercatchers, and in the pools young marine turtles often seek refuge. 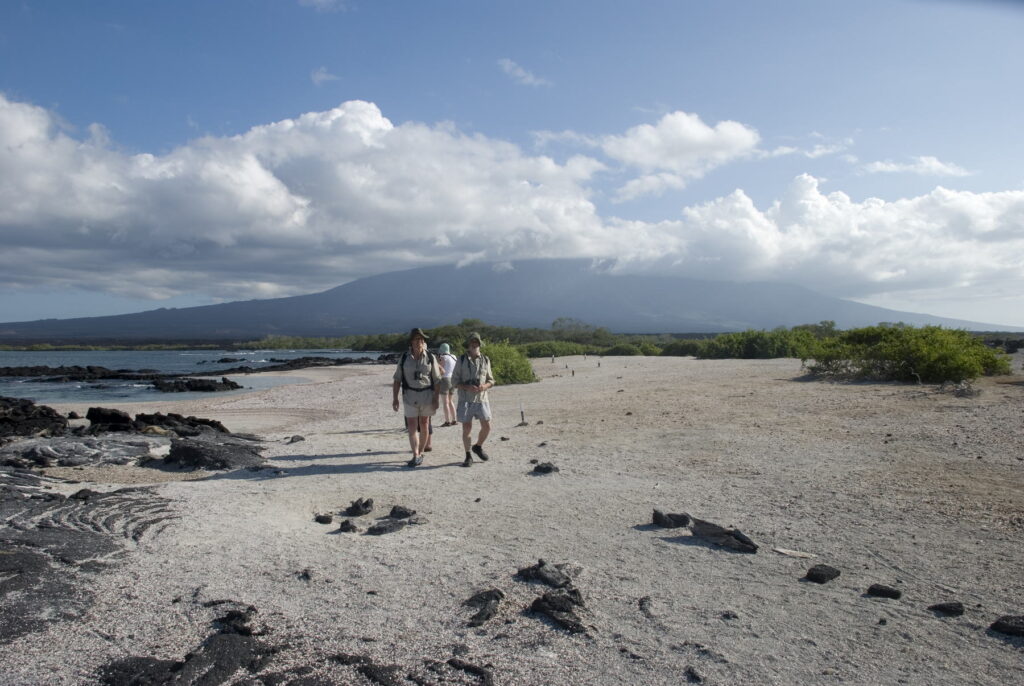 Few boats come here during a week’s cruise, so you are fortunate if yours does. This site has an almost indescribable beauty. Punta Espinosa is a promontory of lava and sand. It has a magnificent position, surrounded by the six volcanoes on Isabela that lie across the rich waters of the Bolivar Channel. Feeding frenzies of boobies, dolphins and even whales can be observed in these waters. 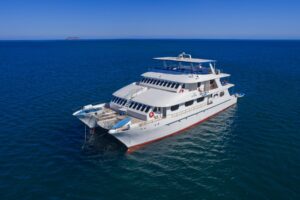 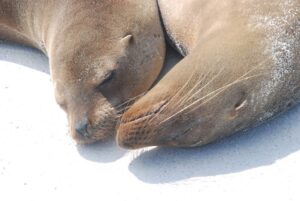 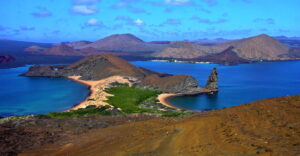