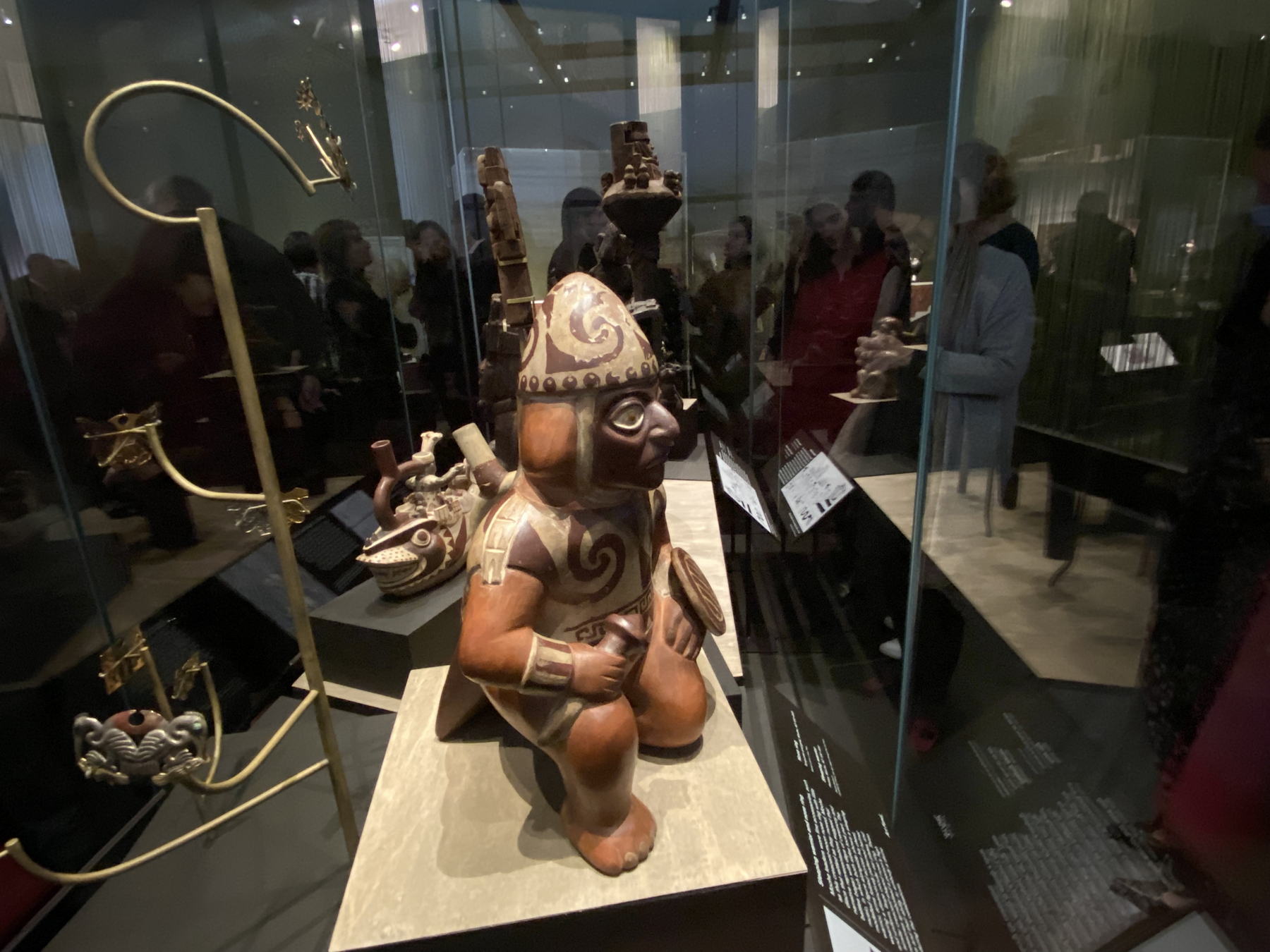 Whilst looking back at my photos from last year’s Peru exhibition, I realized it would be good to share them. If you missed the British Museum’s exhibition here are some snapshots that show the rich history of Peru. The exhibition curated by Dr Jago Cooper and Cecila Pardo who selected six separate cultures. These showcase the extraordinary craftsmanship of early cultures. On display were ceramics and weavings that date thousands of years. The exhibition highlights the relationship between the people and their environment – the dry desert, the rich Pacific Ocean and tropical jungle.

Over 15,000 years ago, people migrated to South America from the north, settling in Peru. They established settlements in the deserts along the coast, the Andes and the tropical forests to the east. Towards 2500 BC, populations grew and settled across the region. They built residential and public spaces, developed agriculture, produced textiles and pottery. Andean societies had no writing, so textiles and ceramics also served to express beliefs through images.

Towards 1200 BC, a new belief system spread from the northern centre of Chavin de Huantar. This is one of the most impressive early archaeological sites of the Andes. It served as a ceremonial centre. Visitors would come to consult the oracle, pleading for favourable weather and fertility. Its mythology merged human, and animal imagery, recreated in pottery and carved into stone.  Common images are feline, bird and snakes.  Such as this golden headdress found in a burial site with mythical feline heads .

The Paracas society emerged along the arid desert coast of southern Peru around 900 BC. They worshipped their ancestors and gave the dead a safe journey to the next world. This was to protect the living. Skilled weavers made patterned textiles to wrap around the dead. They placed a funerary bundle in tombs. Together they placed offerings, including headbands, waistbands, metal objects and ceramics. These would ensure the continuation of the cycles of life, death and rebirth. The weavings are some of the finest ever produced.

The Nasca created massive lines and drawings known as geoglyphs. These could only be appreciated from the sky. They did this by removing the top layer of earth to expose the lighter sediment below. Evidence showed people walked among the lines and performed rituals. This may have been for fertility or searching for water.  They followed Paracas traditions, with lines in the shape of animals like whales, monkeys, and hummingbirds. These images are also seen in ceramics and textiles. The Nazca drum shows ancestral deities merged with animals.

The Moche lived in settlements along the coast and inland valleys of northern Peru. They built large towns of adobe centred around pyramids.  Thought to be among the best potters of the Ancient World. The Moche took artistic design to creative heights, using ceramics to tell intriguing stories. Their portraits are so lifelike you feel they are living people. Symbolic images were also carved in wood and metal, as seen in the Huaca de la Luna, located near Trujillo. The rare wooden sculptures found on Macabi islands, depict prisoners for sacrifice. One pot shows transport of sacrificial victims by boat by the Moche deity Ai Apaec. Another shows a fisherman on a reed boat, identical to those used today at Huanchaco.

The coastal kingdom of Chimú was based in northern Peru between the 10th and 15th centuries. Its capital, Chan Chan, grew to more than 24 square kilometres and had an estimated population of 50,000 to 75,000 inhabitants, the largest cosmopolitan city in South America at the time. The residents came from across the Chimú territory. Chan Chan’s adobe brick walls served as a canvas for images that are replicated on ceramics and textiles such as pelicans and fish.

The Wari state developed in the region of Ayacucho around 600 AD. They expanded to cover a large area, from the southern highlands to the northern coast. Wari officers wore fine ceremonial shirts and four-cornered hats.

They oversaw different aspects of Wari society. This involved the administration of a state with urban planned cities. They performed special religious ceremonies that followed strict artistic rules.

About 1400, the Inca Empire emerged in the highlands of the Central Andes. This covered a vast expanse of territory that included parts of modern-day Argentina, Bolivia, Ecuador, Colombia, and all Peru. From their capital in Cusco, the Inca expanded their empire through an extensive network of roads. This bound together diverse communities and cultures. They kept account of this with the khipu, a method of knotted string counting and record keeping. The Incas had sophisticated agricultural techniques with irrigation and selective breeding. They constructed monumental buildings.  The most famous citadel Machu Picchu means ‘ancient mountain’, built by the Incas in the 15th century. The site includes around two hundred buildings with interlocking polished stone walls. Its builders copied the natural topography, creating artificial mounds and terraces.

The Incas only lasted 150 years, because the conquistadores arrived in 1532. Hernan Pizarro captured and killed the last Inca ruler, Atahuallpa. Spanish  chronicles  described what the Incas looked like and what they wore, with tunics like those found today. Much of the Inca gold and silver artworks were taken by the Spanish and melted down. Those items that remain in museums give a glimpse of the treasures that were found. The rest, is history.

Take a look at our Peru tours

RELATED: Best Things To Do In The Sacred Valley

10 Classic Things To Do On Your First Visit to Peru