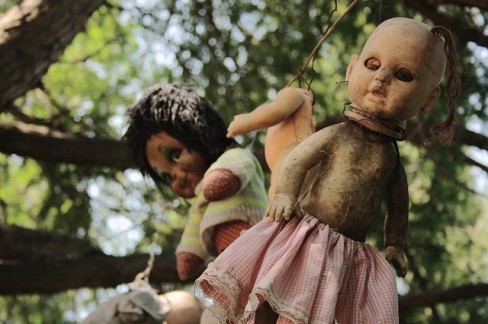 If you are looking for something a little different on your travel’s how about a visit to the spine-chillingly creepy Island of Dolls (Isla de las Munecas) in Mexico City. This is probably the most morbid tourist attraction in Latin America. Thousands of decaying dolls of all shapes and sizes hanging from trees surround you from every angle.

So where did it all start? Legend has it back in the ‘50s the islands caretaker, Don Julian Santana, was unable to save a girl who drowned in the canal. He found a doll on the bank he assumed was hers and hung it from a tree. Later he believed that her spirit was haunting the island and began to collect more dolls to keep her at bay.  Although Santana died in 2001 his cousin now looks after the island and believes that the dolls come alive at night. To get to the Island of Dolls you need to take the metro line 2 south to Xochimilco changing at Tren Ligero.