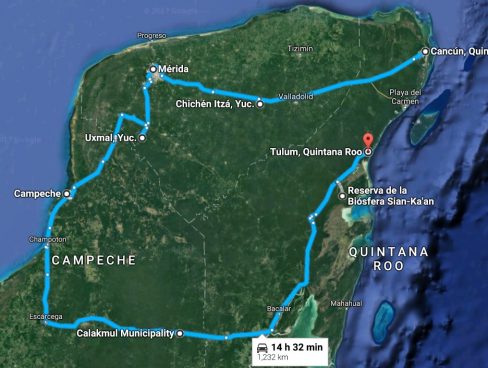 The Yucatán peninsula in eastern Mexico borders both Belize and Guatemala and offers a diverse range of flora, fauna and vast host of UNESCO World Heritage sites including the Mayan ruin of Chichén Itzá, now one of the ‘New Seven Wonders of the World’. The best way to visit the UNESCO ruins and colonial cities is by self-drive which offers the chance to spend as long or as little in each place you visit.

Arrive in Cancun, pick up your car hire and begin the journey. The first drive to Chichén Itzá takes around three hours. 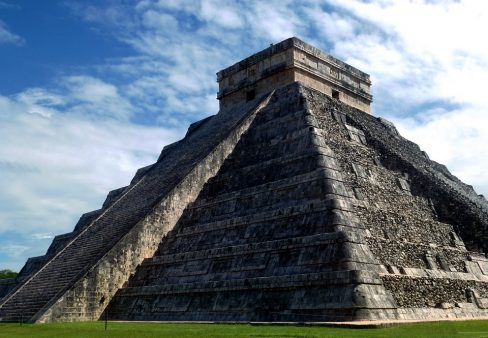 The remarkably well-preserved Mayan ruins of Chichén Itzá are one of the New Seven Wonders of the World. It’s best known for the huge step pyramid known as El Castillo. This ancient city thrived between 600 A.D. and 1,200. The complex includes a ball court, the Temple of the Warriors and the Wall of the Skulls all of which have graphic stone carvings. Each night, a sound and light show illuminates the complex.

Mérida is the capital of the Yucatan and one of the largest cities in Mexico and has the highest percentage of indigenous people of any Mexican city with over half the population being of Maya ethnicity. Though the city is not a UNESCO World Heritage site, this colonial city is well worth taking some time to explore.

Drive south for two hours to the ruins of Uxmal. 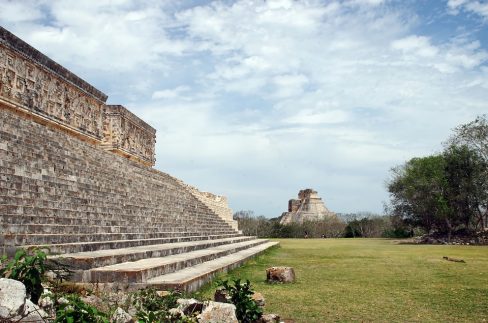 This ancient Mayan town founded in 700 A.D. once had over 25,000 inhabitants. The complex which was built between 700 and 1000 A.D. reveals that the people had knowledge of astronomy and includes the Pyramid of the Soothsayer, the Quadrangle of the Nuns, the Governor’s Palace, the House of the Tortoises, the Ball Court and ceremonial sites.

Drive for three hours to the coastal down of Campeche.

The fortified harbor town of Campeche is a fine example of Spanish colonial architecture. The old city is surrounded by walls and a system of fortifications which are deigned to defend against piracy and attacks from the sea. It was once the most important seaport in Mexico and played a major role in the conquest of the Yucanatan Peninsula and Guatemala from the Spanish conquistadors.

The Calakmul Biosphere Reserve was only granted UNESCO World Heritage status in 2006. It remains the largest forest reserve in Mexico comprising of over 700,000 hectares of protected land. This is not untouched forest. The Mayans were some of the first group to live in the forests with the ruins of city complexes abandoned in 900 A.D. The group consists of the largest populations of flora and fauna in the country and includes the jaguar, puma, white-lipped peccary, howler monkey, king vulture, gray brocket deer and ornate hawk to name but a few.

Sian-Ka-an means ‘Origin of the Sky’ in the language of the Mayan people who once inhabited the region. Located on the eastern coast of the Yucantan peninsula, the reserve is made up of a series of tropical forests, mangroves, marshes and a barrier reef. Inhabiting the reserve is a remarkable number of flora and fauna including 300 species of birds.

Drive an hour up the coast to Tulum. 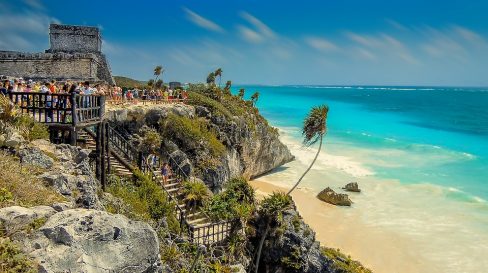 The Mayan ruins of Tulum is not a UNESCO World Heritage site, but it’s well worth taking some time to explore them on the drive up the coast to Cancun. The ruins are situated on 12-metre high cliffs overlooking the ocean and were one of the last cities to be built by the Maya. It managed to hold off conquest by the Spanish for around 70 years but Old World diseases brought by the settlers resulted in the city being abandoned.

Continue up the coast for two hours to Cancun. Drop off the car hire and fly back home.