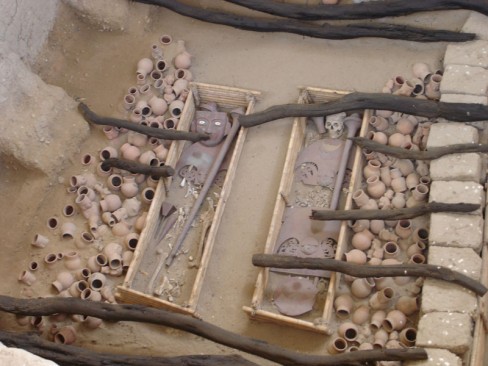 Archaeologists have found an apparent ritual mass sacrifice, including decapitations and a royal beer bash, near a pre-Inca pyramid in northern Peru, according to National Geographic News. Excavations near the ancient Huaca Las Ventanas pyramid first uncovered bodies in August, and more have been emerging since then. The pyramid is part of the Sicán site, the capital of the Lambayeque people—also known as the Sicán—who ruled Peru’s northern coast from about A.D. 900 to 1100. Perhaps more than a hundred bodies lie in a pit, buried nude and some headless. The bodies are almost all adult males, each accompanied by what appears to be an adult woman.  Despite the huge mass burial, the Sicán were not warmongers, they used an economy based on trade to build an empire that, at its peak, spanned thousands of miles across what is now Ecuador and Peru. The remains were found with ceramic jars used to brew and serve the corn-beer chicha, a common drink at funeral feasts throughout the Andes. The pit also contains ceramic heads of llamas, pumas, monkeys, turtles and bears. Whilst we recommend Peruvian beer we advise our passengers to keep their heads on.