The Last Supper with a Guinea Pig 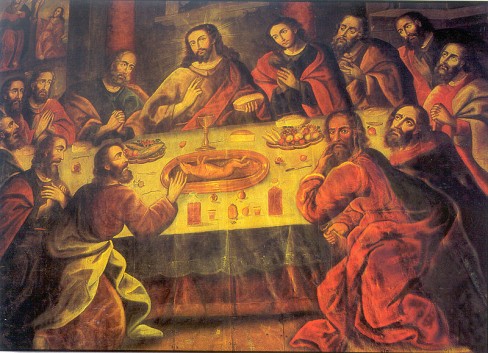 If you’ve ever visited the Cathedral in Cuzco you may have noticed a painting depicting Jesus and his disciples at The Last Supper. Although it looks like a piece of religious European art it was painted by a Peruvian man called Marcos Zapata in the 18th century. After the Spanish conquered the Inca Empire in 1534 they tried to convert the remaining Incas to Catholics and one of the ways they tried to do this was through art.  Religious artists from Spain were sent to Cuzco to open the Escuela Cuzqueña (Cuzco School) and teach indigenous Quechua people and mestizos how to draw and paint. What’s interesting about Zapata’s painting are the Andean cultural influences that may not be immediately apparent. Native Peruvian foods including peppers, corn and different coloured potatoes adorns the table as well as cuy (guinea pig), a typical Andean staple. It’s commonly considered that the drink is either chicha (fermented corn) or the local fire-water Pisco. To the forefront of the painting Judas can be seen holding a bag of money below the table. Some say that this figure looks very similar to Francisco Pizarro, the Conquistador who captured and murdered the Inca Emperor Athualpa.

Want to see the painting for yourself? Get in touch.