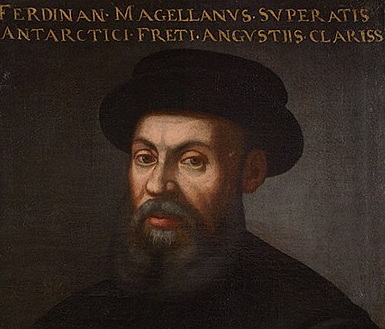 A Voyage of Discovery to the Spice Islands

The Portuguese explorer Fernão de Magalhães set sail 500 years ago seeking a route to the spice islands by going west. He headed off with 270 men on five ships, sponsored by the Spanish crown, having fallen out with Portuguese King Manuel I (over the spoils of a previous expedition). King Charles of Spain gave his blessing to the new voyage. After a brief stop in the Canary Islands, in January 1520 they landed in Santa Lucia Bay, called Rio de Janeiro today. Most of that year was spent sailing down to Patagonia and looking for a way through to the Pacific Ocean. A hard winter in San Julián provoked a mutiny in which some men were executed, and a ship was lost in a storm.

The Strait of Magellan

In October 1520 they entered the Strait, that later took his name. Braving gales they headed into to the relatively calmer waters of the ocean he called ‘Pacific’. The three remaining ships crossed the ocean via the South Seas. It took far longer than anticipated, more lives were lost to scurvy and starvation. At the Mariana Islands they were met by hostile inhabitants. They were the first Europeans to arrive in the Philippines. During a battle between two local tribes Magellan was mortally wounded, and his men fled. They were only three weeks sail away from their destination, the Moluccas. Here under the command of the Basque navigator Juan Sebastián Elcano, they filled the ships Victoria and Trinidad with cloves and cinnamon. The Trinidad took on water and was left behind with its crew and later lost at sea.

The Victoria sailed for home via the Cape Verde Islands, where the Portuguese were surprised to find cloves on board. Elcano did not hang around to explain that they had sailed around the world. Though Magellan did not make it all the way, his expedition had demonstrated that the world is round, larger than previously known and much of it covered in ocean. Only 18 men survived, including Antonio Pigafetta who told the story of their incredible voyage on arrival in Seville. Pigafetta published his diaries which helped restore the reputation of Magellan. It was King Charles V of Spain who named the strait after the navigator.

The Strait of Magellan can be included in a tailor-made trip to Patagonia stopping at Chile’s southernmost town Punta Arenas. It is close to the Torres del Paine National Park. From here, cruises operate to Ushuaia in Argentina and even flights to Antarctica. You can take an excursion to see the penguins (Spheniscus magellanicus) that bear the name of Magellan, who first spotted them in 1520. Please contact us to start planning your journey.

Related: Journey to the Ends of the Earth
Take a Cruise Around the Horn