Allow yourself some time to acclimatise

Arriving at the highest airport in the world in La Paz will leave you breathless, not just from the altitude but also from the impressive city that lies in the hidden canyon.

After taking some time to explore the old city, with its colonial churches and museums, our guides will show you the Indian street markets.  Here Aymara woman in bowler hats and colourful skirts are selling food and drink, handicrafts, coca leaves and other strange medicines.

Outside of La Paz try playing golf on the highest golf course in the world or skiing in some of the highest peaks. How about a cycle down the infamous ‘death road’: that winds its way around beautiful valleys and gorges with waterfalls and incredible views. Maybe climb to the summit of the snow-capped Huayna Mountains or trek with Llamas on Condoriri.

La Paz is one of the most fascinating cities in South America.  What it lacks in attractions it makes up for with the interesting local people, colourful markets, amazing setting and wonderful views.

Don’t miss the ‘witchcraft’ market with its amulets, potions and herbs.

When to go: All year round 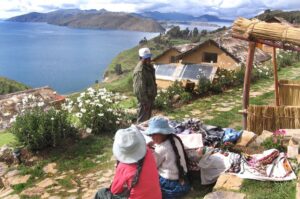