Off to Ecuador’s Amazon 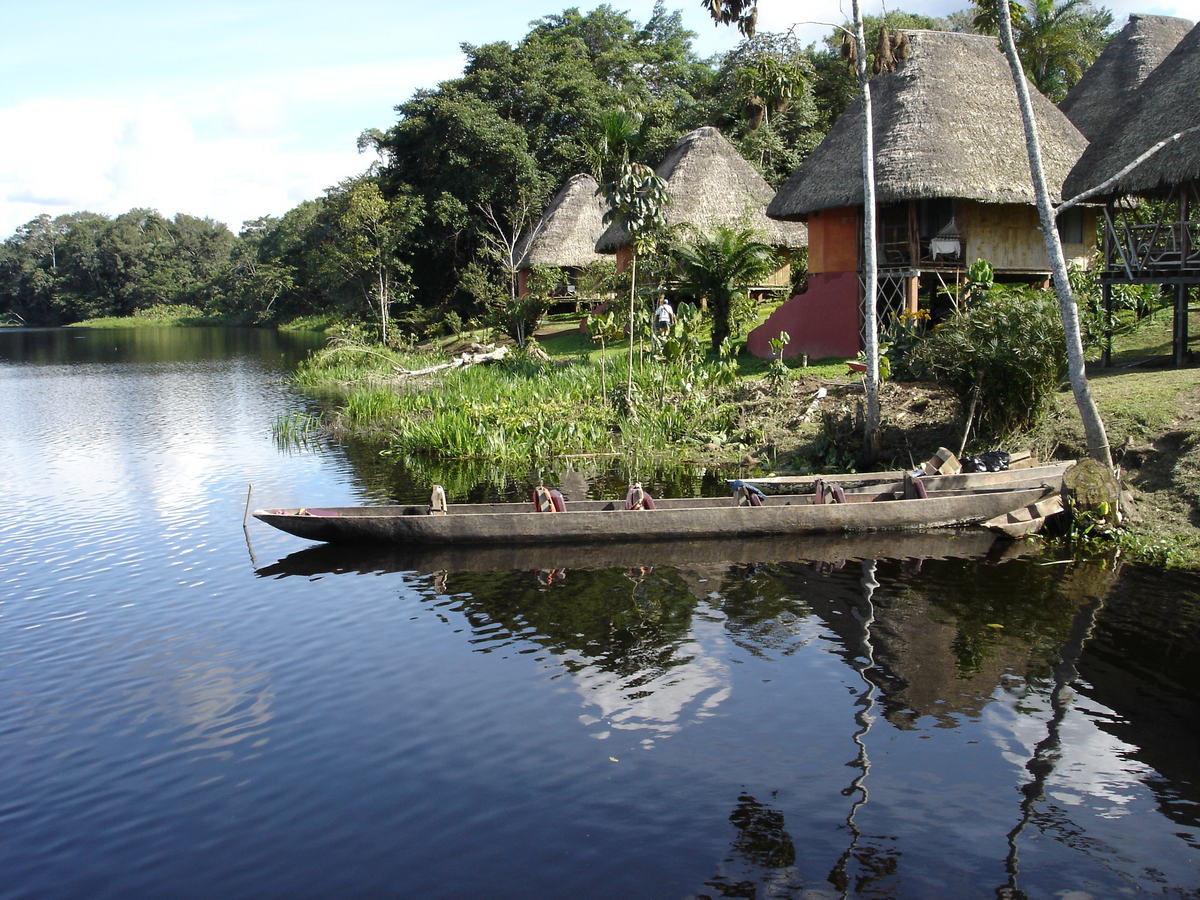 The rickety old bus teetered on the edge of a cliff. Hundreds of metres below the Pastaza River flowed over rapids. This was my first journey to Ecuador’s Oriente or Wild East. It was over 40 years ago when the road from Baños to Puyo was often blocked by landslides or washed away into the valley. Spectacular waterfalls like the Brides Veil or the Devil’s Cauldron passed by in a flash. Public buses did not make photo stops. As the altitude got lower the temperature got higher, much higher. Vegetation changed from grassy moors to tropical plantations of banana and papaya. At Puyo it felt I was in the tropics. Changing buses at Tena, a frontier town, the final leg was by an open sided wooden-seated bus or chiva. The end of the road lies at the river port of Misahualli. Joining up with fellow backpackers, we headed off with a machete-wielding local guide to explore the jungle by dug-out canoe.

About a third of Ecuador lies within the vast Amazon basin. For most of history it has been home to indigenous tribes and a huge variety of flora and fauna. Until recently those tribes hunted and fished as they had for millennia. In the mid twentieth century the discovery of oil in the Oriente changed the status quo. Agricultural settlers cleared land, and missionaries arrived from North America. In the 1950’s warriors with spears killed some of these evangelists. The Spanish called the tribe Aucas, meaning ‘savages’ but they prefer Huaorani. The next decades saw a conflict between a traditional way of life and development of Ecuador’s oil. Further south the head-hunting Jivaro lived, (now known as the Shuar). Indigenous Quichua people from the mountains had settled as farmers along the riverbanks. By the 21st century oil was Ecuador’s main source of income. The extraction of oil created health problems for the local population. This was due to poor environmental control with spills and toxic waste dumped.

My first trip there it was all about adventure. We saw insects and frogs that mimicked leaves, watched busy leaf-cutter ants. We watched scary big conga ants that can knock you out with their bite and avoided stepping on pit-vipers. We learned about medicinal plants and swung on vines like Tarzan. Locals showed us how they trapped guatusas or agoutis. We slept in very rustic lean-to’s and felt like explorers for a few days. A couple of miles down the river at Ahuano, we passed the first ‘luxury’ tourist lodge, the Casa del Suizo. Built by a Swiss immigrant Benny Ammeter and featured a swimming pool. In 1985 he built tourist cabins further down the River Napo. Sacha Lodge, now run by his son-in-law Guillermo. Later I led groups of wildlife tourists to stay at Sacha. We ticked-off hundreds of birds and several monkey species including the pocket-sized pygmy titi monkey. The guides know their stuff. The lodge is far more remote than anything you can reach by road. First take a plane to Coca (Francisco de Orellana) port then two hours by motorized canoe. The journey by river transport is part of the rainforest experience. Herons and kingfishers perch along the banks. A multitude of shades of green form the backdrop and the odd Kapok tree towers over.

Further down the Napo River, 60 miles from Coca is La Selva lodge. This was the vision of an American businessman, Eric Swartz, who fell in love with the rainforest. Like other lodges it overlooks a tranquil ox-bow lake, Garzacocha. The lake is beautiful. On my first trip there I’d swim in these lakes, but had second thoughts after seeing the number of caiman alligators. Not to mention the pirañas, electric eels and sting rays. Today La Selva is completely refurbished. Now run by an Ecuadorian company, with cabins for up to 50 people, 24-hour solar powered electricity, and hot water. Nearby Sani lodge, built by a local community is less luxurious, between backpacking and comfort.

On the southern side of the Napo River lies the vast Yasuni National Park. This forest is home to a dozen species of primate including the Red Howler Monkey. Only one tourist lodge lies within the park, Napo Wildlife Centre. Owned today by the Añango Kichwa community, true guardians of the forest. The lodge is the furthest from Coca and involves a journey up a small creek to the lake. Its isolation makes wildlife viewing even better. The lake is home to many black caiman, and hoatzins, a primitive bird known as ‘stinky turkey’. A memorable encounter was when we came upon a group of giant river otters. These are only found in pristine environments. Napo Wildlife Centre does not skimp on luxury, with king-size beds, private bathrooms, and hot showers. The service is top-notch, rubber boots magically appear clean daily. The community have two ‘salt-licks’ on their land. These are mineral-rich cliffs, which parrots, and macaws descend in their thousands. They munch on the clay which boost their diet with minerals and thought to aid removal of plant toxins. For birdwatchers and photographers, it is an unforgettable opportunity. I spotted many species including blue-headed and mealy parrots. A smaller ‘lick’ lies deeper in the forest is also visited by mammals such as peccary, deer, and tapir.

Later trips took me to the Aguarico river further north, via the oil town of Lago Agrio. Evidence of oil production is everywhere and not the sort of place to linger. I saw roads made by pouring crude oil from tankers. The Aguarico snakes its way through the most amazing area of pristine wildlife. This is the Cuyabeno reserve. Much of the region are forest lagoons where time seems to have stood still. I spotted a rare black jaguar strolling along the riverbank. I got up-close to an anaconda curled on a log. From 1976, the Ecuadorian Metropolitan Touring ran Amazon cruises on the ‘Flotel Orellana’. This moved from the Napo River to the Aguarico in the 1980’s but later replaced by rustic lodges. Their lodge at Imuya, along the Peruvian border, was in a wonderful setting over a lagoon. Imuya succumbed to a fire and was never replaced. The logistics of operating so remote proved insurmountable.

Captain Raúl García, purchased the rusting hulk in 2003 and rebuilt it as the Manatee cruise ship on the Napo. He ran this for a decade, then built a new upscale boat, the Anakonda. This has 18 spacious suites and air-conditioned luxury. Four of the suites are deluxe with balconies and jacuzzi’s. Both boats are a good option for those tourists who prefer creature comforts. The boat travels to a new area overnight and this cuts down the hiking and canoe journey times. The only disadvantage is the hum of air-conditioning drowns out the nocturnal sounds. They do offer the chance for a night ‘glamping’ in the forest. The cruise stops on both sides of the River Napo and is a good option to see the pink river dolphin. García works closely with the local communities. 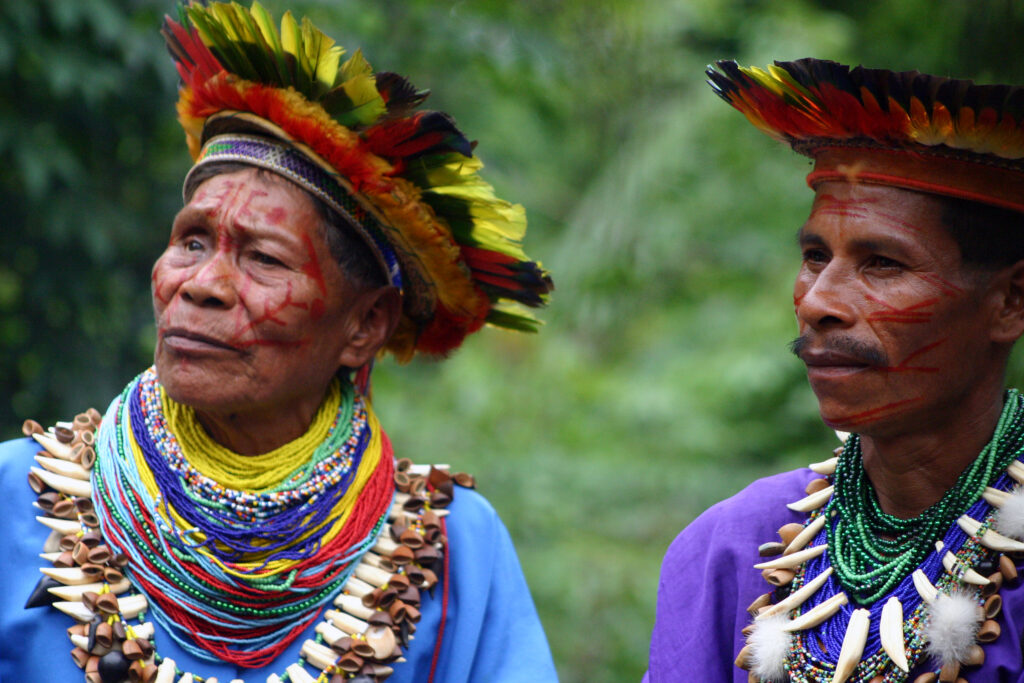 Indigenous groups that have turned to tourism are Kichwas from the mountains, and the Cofanes and Sionas. One group of Amazonian inhabitants that offer a tourist experience are the Ashuar, who operate Kapawi lodge. I visited in the 1990’s, a logistical nightmare for groups. You can only arrive by light aircraft, to a dirt airstrip, one can get stuck for days if the weather turns nasty. Though Amazonian rainstorms, with thunder and lightning, is an unforgettable experience. We got to see how they fish and had a cleansing ceremony with the shaman. I must admit I was nervous about drinking ‘chicha’ a brew made by chewing manioc and spitting into a bowl.

One of the best ways to observe the forest is to climb tree towers. From a rickety wooden structure at Sani, to a series of canopy walkways between metal towers at Sacha. All the lodges have at least one such tower. Climbing a tower, you get a birds’ eye views of the forest (not recommended for vertigo sufferers). Sloths hang upside down like balls of lichen. Below are toucans and macaws, and if you are lucky, a harpy eagle will swoop down searching for prey.

The headwaters of the Amazon are the most biodiverse region on the planet – where Andes meets Amazon. In Ecuador the region is the most accessible, either a day’s journey by land or a 45-minute flight. Well over 600 species of bird exist and innumerable insects and other creatures. Tourist lodges provide a sustainable future for generating income for the forest dwellers. There is a lot of talk about how not flying around the world is a good way to reduce your carbon footprint. Yet, these small communities depend on visitors. So don’t feel guilty about it, make sure that you book a trip that works with local communities in a responsible way.

Back to my first Amazon adventure forty years ago. Heading northwards from Tena, I stopped at the farming hamlet of Archidona. I stayed with a family eking a living growing tropical fruit. They showed me some caves on their land and asked me if I thought it had potential as a tourist attraction. I said yes definitely. A short hike away were rock carvings, petroglyphs. Today both caves and petroglyphs are sustaining the community as tourists stop by. They are on Google, Cavernas of Jumandy.

Heading on a loop back to Quito, I stopped at the cloud forest at San Isidro lodge near Cosanga. Owned by the Bustamante family. They too have seen the potential of eco-tourism. Today the no-frills rooms have become one of the meccas for bird watchers. It is one of the best places to see the extraordinary cock-of-the-rock, a big red bird that is an icon of South America. Finally, I stopped at the thermal springs of Papallacta. In those days it was a couple of hydrothermal pools with few facilities. Today it has grown into a complex of hotel and luxury spa and provides employment to many locals. I am privileged to have seen all these small enterprises develop of the years. I hope that they will continue to do so despite reduction in visitors due to the pandemic. Ecuador is one the best places to visit one of the World’s true eco-tourism destinations.

Related Blogs: Ecuador’s Mountain Reserves
What to pack for a visit to the Amazon